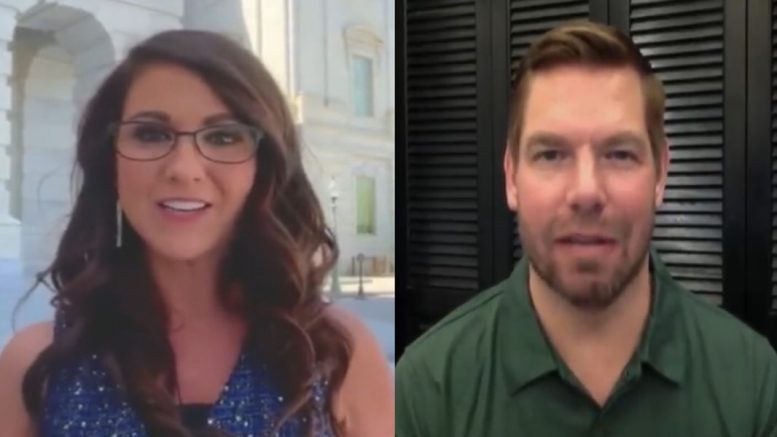 Mr. Swalwell posted a tweet on Tuesday on his congressional Twitter account of a picture of Rep. Boebert holding an AR-15 rifle — side by side — next to a picture of the suspect, Robert Crimo III.

According to a report by Axios that was released in December 2020, Swalwell was targeted by a Chinese national named Fang Fang — aka Christina Fang — an alleged operative for China’s Ministry of State Security, which is the country’s intelligence organization, as previously reported by The Freedom Times.

Fang first interacted with Swalwell in the early stages of his political career when he served on the Dublin City Council in California, and right before being elected to the U.S. House of Representatives in 2012. Fang went on to be involved with raising money for Swalwell’s reelection campaign, according to the report, and even helped place an intern in the congressman’s office.

Swalwell reportedly cut off contact with Fang in 2015 after U.S. intelligence officials provided a “defensive briefing” to him in regards to Fang’s activities that they had been monitoring, according to the report.

While Swalwell and his office refuse to comment on the extent of his relationship with the alleged Chinese spy, Axios reported that Fang had “romantic or sexual relationships” with at least two elected officials, who were mayors at the time of their encounters with Fang.

Three months after his presidential announcement, Swalwell dropped out of the 2020 Democratic presidential primary.

The Colorado congresswoman further said, “Democrats love to talk about dangerous rhetoric. Swalwell is a Russia Hoax conspirator and failed presidential candidate that slept with a Chinese spy. Now he’s comparing me to a deranged murderer. When will Democrats condemn HIS dangerous rhetoric?”

Swalwell is a Russia Hoax conspirator and failed presidential candidate that slept with a Chinese spy.

Now he’s comparing me to a deranged murderer.

When will Democrats condemn HIS dangerous rhetoric? https://t.co/lyZGAH0DaD

Meanwhile, Swalwell posted another picture of his colleague, writing, “Posted without comment …”

Boebert again responded, calling Swalwell a “creep” and telling the congressman, “You can’t date me”.

.@EricSwalwell, give it up creep.

Did Fang Fang block you on WeChat?

You can't date me. https://t.co/ajBTJS3ZNm

(Related: Rep. Boebert Erupts On House Floor: “My Colleague…Slept With Fang-Fang, A Chinese Spy…Sleeping With The Enemy”)

Steve Bannon Indicted For Contempt Of Congress After Defying Subpoena