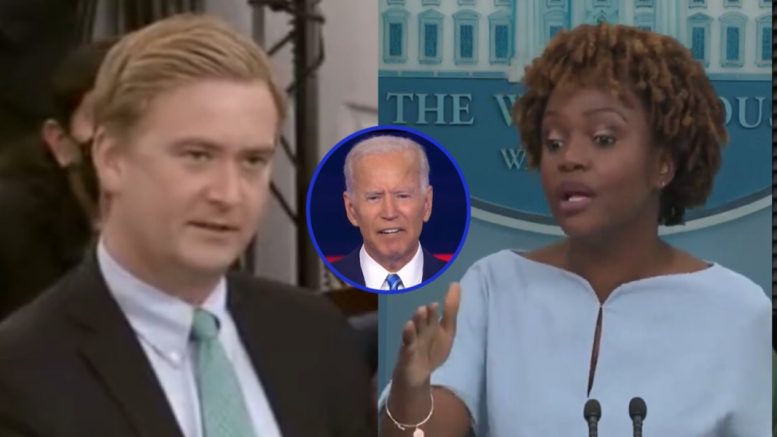 Fox News White House correspondent Peter Doocy questioned press secretary Karine Jean-Pierre on Tuesday over a backup voicemail recording that surfaced from Hunter Biden’s laptop computer showing that Joe Biden spoke with his son Hunter about Hunter’s business dealings with a Chinese oil giant, even though the career Democrat politician has repeatedly said that he has never talked to his son about his foreign business dealings.

NEW: In 2018, Joe Biden left a voicemail for Hunter saying he wanted to talk to him about a New York Times report on Hunter’s business deals in China.

As reporting on Hunter Biden’s foreign business dealings have come to light, Joe Biden has on a number occasions denied ever having spoken to his son about them, both directly and through his press spokespersons to members of the press who have asked about the matter.

The White House press secretary refused to answer Doocy’s question, saying, “We’re not, from this podium — I’m not going to talk about alleged materials from the laptop. … It’s not happening. I refer you to his son’s representative.”

White House Press Secretary Refuses To Answer Question About A Voicemail Of President Biden Talking To His Son About His Overseas Business Dealings@pdoocy: "Are you disputing that that is the President's voice on that voicemail?" pic.twitter.com/gxKCfm7OJe

Joe Biden gets fired up when Fox News' Peter Doocy asks him how many times he discussed overseas business dealings with Hunter, insisting that he's "never spoken" with his son about that before demanding that Doocy "ask the right questions" as it relates to Trump. pic.twitter.com/UU78mddkxC