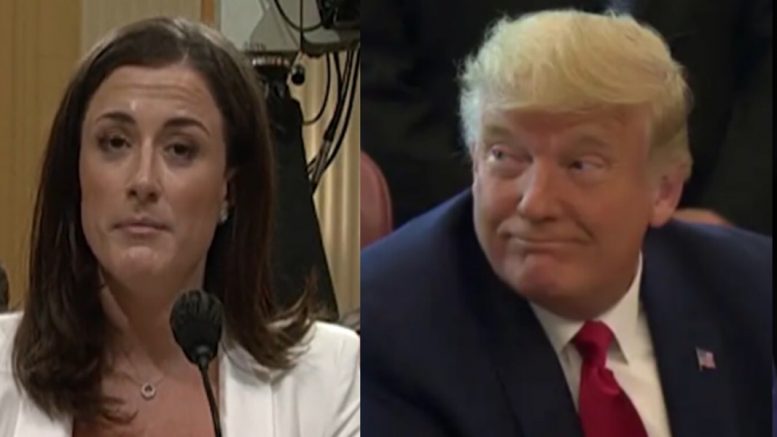 45th President Donald Trump issued a series of “Truths” on Truth Social Tuesday, firing back at claims made by Cassidy Hutchinson, a former aide to Mark Meadows, who testified during the sixth hearing held with House Select Committee — that is allegedly investigating the events from the January 6, 2021 Capitol protest.

Trump, in his statements on Truth Social, said he “hardly” knew Hutchinson and called her “bad news”, a “Total Phony!!!”, and a “total bull…. artist”.

“I hardly know who this person, Cassidy Hutchinson, is, other than I heard very negative things about her (a total phony and “leaker”), and when she requested to go with certain others of the team to Florida after my having served a full term in office, I personally turned her request down. Why did she want to go with us if she felt we were so terrible? I understand that she was very upset and angry that I didn’t want her to go, or be a member of the team. She is bad news! Trump wrote on Truth Social.

“Never complained about the crowd, it was massive. I didn’t want or request that we make room for people with guns to watch my speech. Who would ever want that? Not me! Besides, there were no guns found or brought into the Capitol Building…So where were all of these guns? But sadly, a gun was used on Ashli Babbitt, with no price to pay against the person who used it!” he said, referring to Hutchinson’s claims that Mark Meadows was allegedly told before Jan. 6 that people in the crowd had “knives,” “guns,” “spears,” and more.

Trump continued: “Her Fake story that I tried to grab the steering wheel of the White House Limousine in order to steer it to the Capitol Building is ‘sick’ and fraudulent, very much like the Unselect Committee itself – Wouldn’t even have been possible to do such a ridiculous thing. Her story of me throwing food is also false…and why would SHE have to clean it up, I hardly knew who she was?”

“She changed lawyers a couple of days ago, and with it, her story totally changed! SHOCKER???” the 45th President also noted. He added: “Her body language is that of a total bull…. artist. Fantasy Land!”

“I NEVER SAID, ‘MIKE PENCE DESERVES IT’ (to be hung). Another made up statement by a third rate social climber!” Trump also wrote after Hutchinson alleged that Meadows said the former president was not upset about protesters chanting about hanging Mike Pence.

Trump also pointed out that Rep. Liz Cheney played a video clip of his remarks, but left out in his speech to, “GO PEACEFULLY & PATRIOTICALLY”, then asked, “Isn’t she disgraceful???”

“There is no cross examination of this so-called witness. This is a Kangaroo Court!” he further expressed.

“Will anybody ever be allowed to say that the Election was Rigged and Stolen? Will the Unselects EVER discuss that our Country is going to hell because of a fraudulent election? How about analyzing the Election Results?” Trump asked.

“Why didn’t they use the 10,000 troops that I offered up on January 3rd? There would have been no January 6th?” he also wondered.

The following clips are some of the claims made by Cassidy Hutchinson during Tuesday’s Jan. 6 hearing:

Cassidy Hutchinson testifies that she was told that as then-President Donald Trump was being driven back to the White House after the Jan. 6 rally that he demanded to be taken to the Capitol and tried to grab the steering wheel from a Secret Service agent. https://t.co/JefVhEsY0b pic.twitter.com/uUyQcnSlLG

"Mark had something to the effect of, he doesn't think they're doing anything wrong."

"There was ketchup dripping down the wall." Cassidy Hutchinson says then-President Donald Trump threw his lunch against a wall when he learned of an @AP article in which then-Attorney General William Barr said the DOJ had not found evidence of voter fraud. https://t.co/0WDFU8fj8E pic.twitter.com/A7LiiB8NAL

"As an American, I was disgusted."

Cassidy Hutchinson reacts to a tweet by then-President Donald Trump that "Mike Pence didn’t have the courage to do what should have been done" after recounting to the Jan. 6 panel Trump's response to violent threats against his vice president. pic.twitter.com/heX6lo6ukS