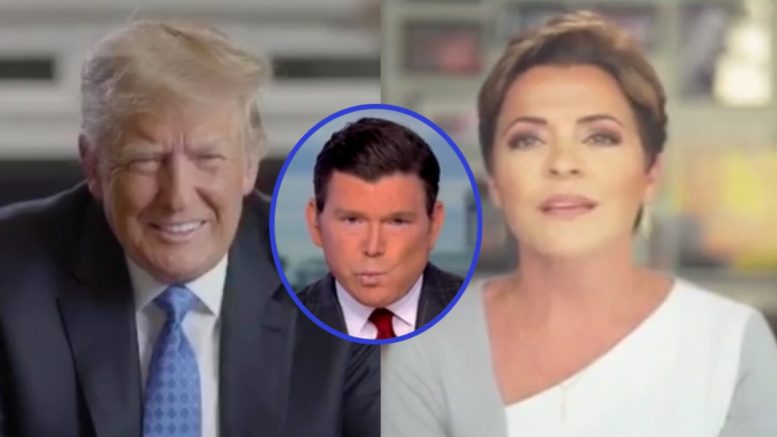 Trump, in a statement on Truth Social, said the interview a “MUST WATCH” and Lake “absolutely destroyed” Baier “on the subject of the 2020 Presidential Election Fraud and ‘irregularities'”.

“Arizona Gubernatorial Candidate Kari Lake was absolutely fantastic in her interview with a very unfair Bret Baier on Fox News. She absolutely destroyed him on the subject of the 2020 Presidential Election Fraud and ‘Irregularities'”, the 45th President wrote on Truth Social.

“It is a MUST WATCH, she will never be invited back, and he wanted to get off that subject as quickly as possible – had no answers,” Trump said.

“Kari is the kind of tough minded and smart person our Country needs if we are ever going to be great again!” he added.

During part of the interview, Baier pressed Lake about her claims that the 2020 election was “stolen” from President Trump through voter fraud in Arizona. Lake cited evidence from the Maricopa County forensic election audit results and along with the political documentary 2000 Mules. Video Below

The Corrupt Media REFUSES to talk about the biggest story of our lifetime: a STOLEN election. Instead they try to divert our attention to meaningless stories…

I will never let them. pic.twitter.com/Me98qZG2ku

See the interview for yourself: https://t.co/K3CTdeWybA

Any American “Journalist” that hasn’t watched THE highest rated Documentary #2000Mules, is doing a disservice to themselves AND to our Country

Guys, just do your due diligence

.@CNN last week, @FoxNews this week. @MSNBC … I’m ready to rumble when you are!