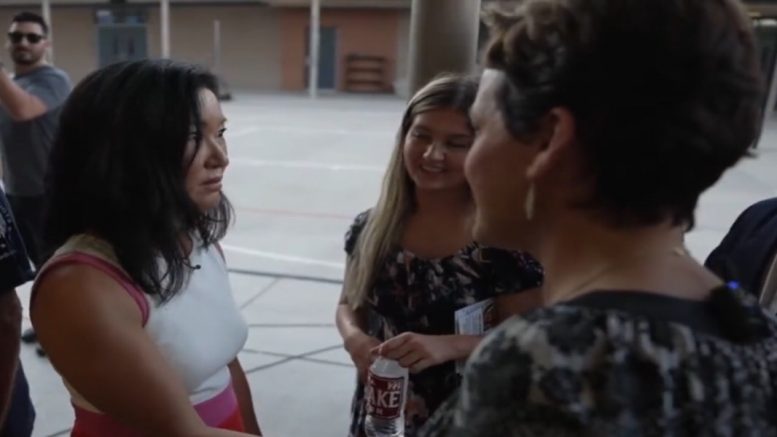 Arizona gubernatorial candidate Kari Lake was greeted by CNN correspondent Kyung Lah outside of an event this week ahead of the Grand Canyon State’s August 2nd primary.

Lah was seen in a video clip asking Lake if she had “a moment to chat” ahead of the event. Lake, however, told the CNN correspondent, “I’ll do an interview as long as it airs on CNN+. Does that still exist?”

Warner Bros. Discovery in April, shut down the CNN+ streaming news service on April 30, just three weeks after its launch.

After asking CNN correspondent Kyung Lah if CNN+ still existed, Kari Lake then said, “I didn’t think so, because the people don’t like what you guys are peddling, which is propaganda.”

Lake shook the CNN correspondents hand and walked off into the building where the event was taking place.

Kari Lake is the frontrunner in Arizona’s Republican gubernatorial primary election with a 12-point lead over her closest challenger, according to a Trafalgar Group poll. The poll found that 38.5 percent of likely Arizona GOP primary voters support Lake. Arizona voters are likely familiar with Lake because she was a Phoenix Fox 10 news anchor, Jordan Dixon-Hamilton at Breitbart reported.

WATCH what happens when @CNN ambushes @KariLake outside of an event 😂

“I’ll do an interview with you… as long as it airs on CNN+, does that still exist?”

Kari Lake is running for Governor in the Great State of Arizona. She is a fantastic person who spent many years working as a highly respected television anchor and journalist. Because of this, few can take on the Fake News Media like Kari.

She is strong on Crime, will protect our Border, Second Amendment, Military, and Vets, and will fight to restore Election Integrity (both past and future!). She is against Covid lockdowns, Cancel Culture, and will end “woke” curriculum in our schools. She will do a far better job than RINO Governor Doug Ducey—won’t even be a contest!

Kari will make her wonderful family, and the MAGA movement, very proud. Kari Lake has my Complete and Total Endorsement. She will be a great Governor for the incredible people of Arizona!

Related: Kari Lake Turns the Tables on Reporter When Asked ‘Do You Think Joe Biden Is the Current President?’