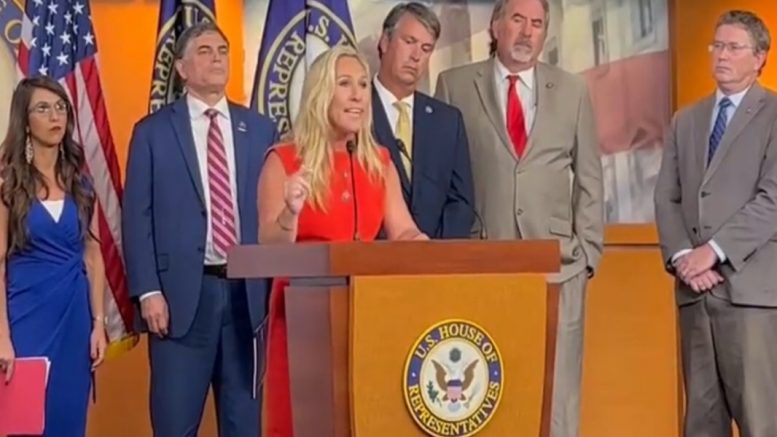 Standing alongside her Republican colleagues, Rep. Marjorie Taylor Greene (GA) called out members in the Senate GOP Wednesday who voted alongside Democrats to “confiscate your guns“.

Her remarks come one day after the Senate voted 64-34 to proceed with the Bipartisan Safer Communities Act, which in part, would “allow police to confiscate firearms unconstitutionally, legally from American citizens who have not been charged, much less convicted of a crime” as reported by Tucker Carlson.

Speaking to reporters during a press conference, Rep. Greene said, “Here’s the problem I have: Joe Biden, then-Senator Joe Biden, that made my school a gun-free school zone, and has left American students like sitting ducks and targets for anyone that wants to go kill them, he’s friends with these Republican Senators.”

“And I’ll tell you who they are, [be]cause I don’t mind naming their names, because people all over our country are furious at them,” she said.

“Senator Blunt, Senator Burr, Senator Capito, Cassidy, Collins, Cornyn, who got booed off the stage practically in Texas, Ernst, Lindsey Graham, who promised me just a few years ago that he would not violate due process rights with Red Flag laws — broke his promise.”

The Georgia also congresswoman tweeted the list of the GOP Senators who voted for gun control.

I can’t express the damage these Republican Senators have done. pic.twitter.com/0hHQXt4TAJ

She also wrote on Twitter Wednesday, “Soon the only safe place for gun owners will be Second Amendment Sanctuary Countries with good sheriffs. Thanks to Senate Republicans”.

Soon the only safe place for gun owners will be Second Amendment Sanctuary Counties with good sheriffs.

Thanks to Senate Republicans.