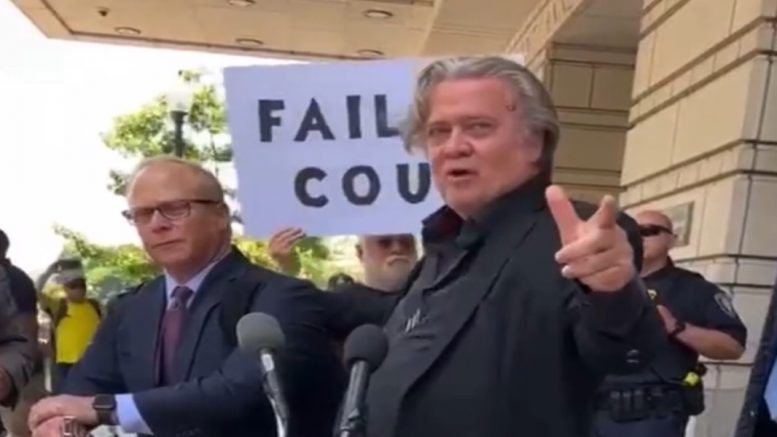 U.S. District Court Judge Carl Nichols on Wednesday turned down former Trump adviser Steve Bannon’s effort to dismiss the case against him for defying a subpoena from the January 6 House select committee.

In November, Bannon was indicted, according to Joe Biden’s Justice Department, for two counts of contempt of Congress after he defied a congressional subpoena from the House committee investigating the January 6 protest of the U.S. Capitol, as previously reported by The Freedom Times.

In an oral ruling, U.S. District Court Judge Carl Nichols rebuffed a series of arguments Bannon had lodged, including that Trump had asserted executive privilege to block his former aide’s testimony. Nichols contended that there’s insufficient evidence that Trump truly did assert privilege or seek to block Bannon from testifying to the panel the House created to investigate the storming of the Capitol on Jan. 6, 2021 and related events.

Nichols, a Trump appointee, also rejected Bannon’s claim that internal Justice Department opinions granted him “immunity” from a congressional subpoena for documents related to his contacts with Trump while Trump was in office. But Nichols said Bannon’s team had not presented evidence that DOJ’s opinions applied in his case — the case of a former White House aide subpoenaed for testimony related to a former president.

Following the judges’ decision, Bannon spoke briefly to reporters, saying, “I look forward to having Nancy Pelosi, and little Jamie Raskin, and Schifty Schiff in here in trial, answering questions”.

Earlier in the month, Bannon’s legal team subpoenaed 16 lawmakers and congressional staffers to testify at the July trial and produce documents, according to one of Bannon’s attorneys and copies of the subpoenas provided to CNN.

The subpoenas also call for targets to hand over a roster of documents, including items relevant to the establishment of the committee, the decision to refer Bannon for criminal contempt and communications with one of Bannon’s lawyers. In the case of Democratic Reps. Adam Schiff and Jamie Raskin, Bannon’s team has also requested documents that pertain to their recently published books, per CNN. Video Below

Bannon is also confident the GOP will take back the House and Senate in November and told reporters Wednesday, “In a new House, we’re gonna have a real investigation and get to the bottom of it — every involvement of the FBI … FBI asset, what happened to Ashli Babbitt, all of it. It’s all gonna come out. It’s gonna come out starting next January”.

Related: Steve Bannon: “This Is Gonna Be The Misdemeanor From Hell For Merrick Garland, Nancy Pelosi & Joe Biden”