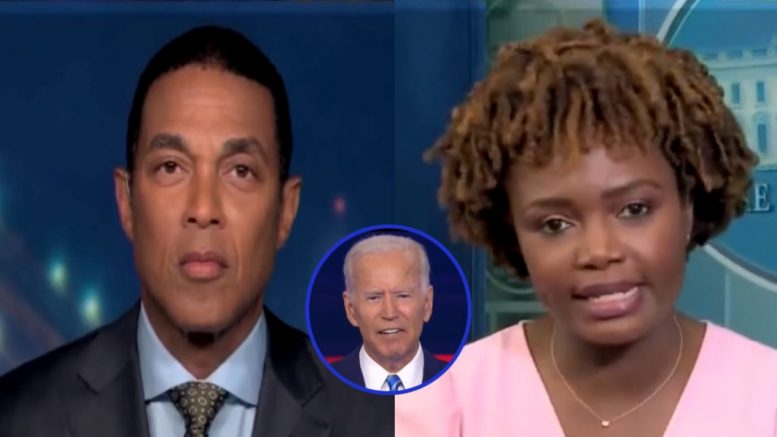 During a Monday night airing on CNN, host Don Lemon asked White House press secretary Karine Jean-Pierre if 79-year-old Joe Biden has the “stamina, physically and mentally” to continue the presidency if reelected in 2024?

The question comes amid some Democrats, within his own party, who reportedly see Biden as a liability and who could potentially lose to a Republican, according to a new report.

“Does the president have the stamina, physically and mentally, do you think, to continue on even after 2024?” Don Lemon asked the White House press secretary.

Karine Jean-Pierre responded: ” Don, you’re asking me this question? Oh my gosh. He’s the president of the United States. You know, he, I can’t even keep up with him.”

“… That is, I … That is not a question that we should be even asking”, she claimed.

“Just look at the work he does. Look how he’s delivering for the American public,” said Jean-Pierre amid rising inflation, historically high gas prices, supply chain crises, border crises, ect. “Look, that article that we’re talking about is hearsay, it’s salacious. That’s not what we care about.” Video Below

DON LEMON: "Does the president has the stamina, physically and mentally, do you think to continue on even after 2024?"

KARINE JEAN-PIERRE: "That is not a question that we should be even asking" pic.twitter.com/dUfQil9qKp

On Monday, Fox News White House correspondent Peter Doocy asked Jean-Pierre if Biden is running for reelection in 2024? She confirmed that the Democrat career politician will in fact run again.

"His answer has been pretty simple which is, yes, he is running for re-election." pic.twitter.com/ikwLzc5FIo

Meanwhile, a DNC member opined that Biden should not seek reelection in the next election.

DNC member: Joe Biden should not seek re-election in 2024.

Biden is a complete failure! pic.twitter.com/IqxmPXIzQF