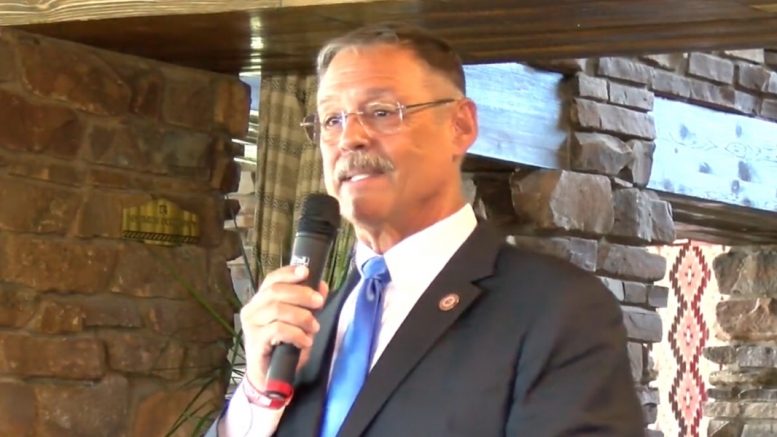 Two Republicans seeking statewide office are asking a federal judge to block the use of machines to tabulate the votes ahead of the 2022 midterms. Arizona State Representative Mark Finchem (R), who is running for secretary of state and Republican gubernatorial candidate Kari Lake filed an injunction in April with a federal court to prohibit the machines in the Grand Canyon State.

Rep. Finchem announced that attorneys, including Alan Dershowitz, representing him and Kari Lake, filed a motion for a preliminary injunction in federal court to stop the use of “unsecure black box electronic voting machines” in Arizona, according to a Wednesday press release.

Representative Finchem issued the following statement Wednesday regarding the filing:

We have filed a motion seeking to ban the use of black box electronic voting machines in Arizona’s elections while the case is pending.

It’s a reasonable question to ask the defendants whether they know how these electronic machines actually work. They are a BLACK BOX – and the voting machine companies REFUSE to make their systems and software open to the public. WHY WOULD ANYONE TRUST THEM?

The lawsuit alleges, among other things, that the documented and unfixable security failures in electronic voting machines—and the lack transparency in these voting systems—violates citizens’ constitutional rights and 42 U.S. § 1983 including: the Fundamental Right to Vote in Violation of the Fourteenth Amendment; and the Fourteenth Amendment’s Guarantee of Equal Protection. Continued Below 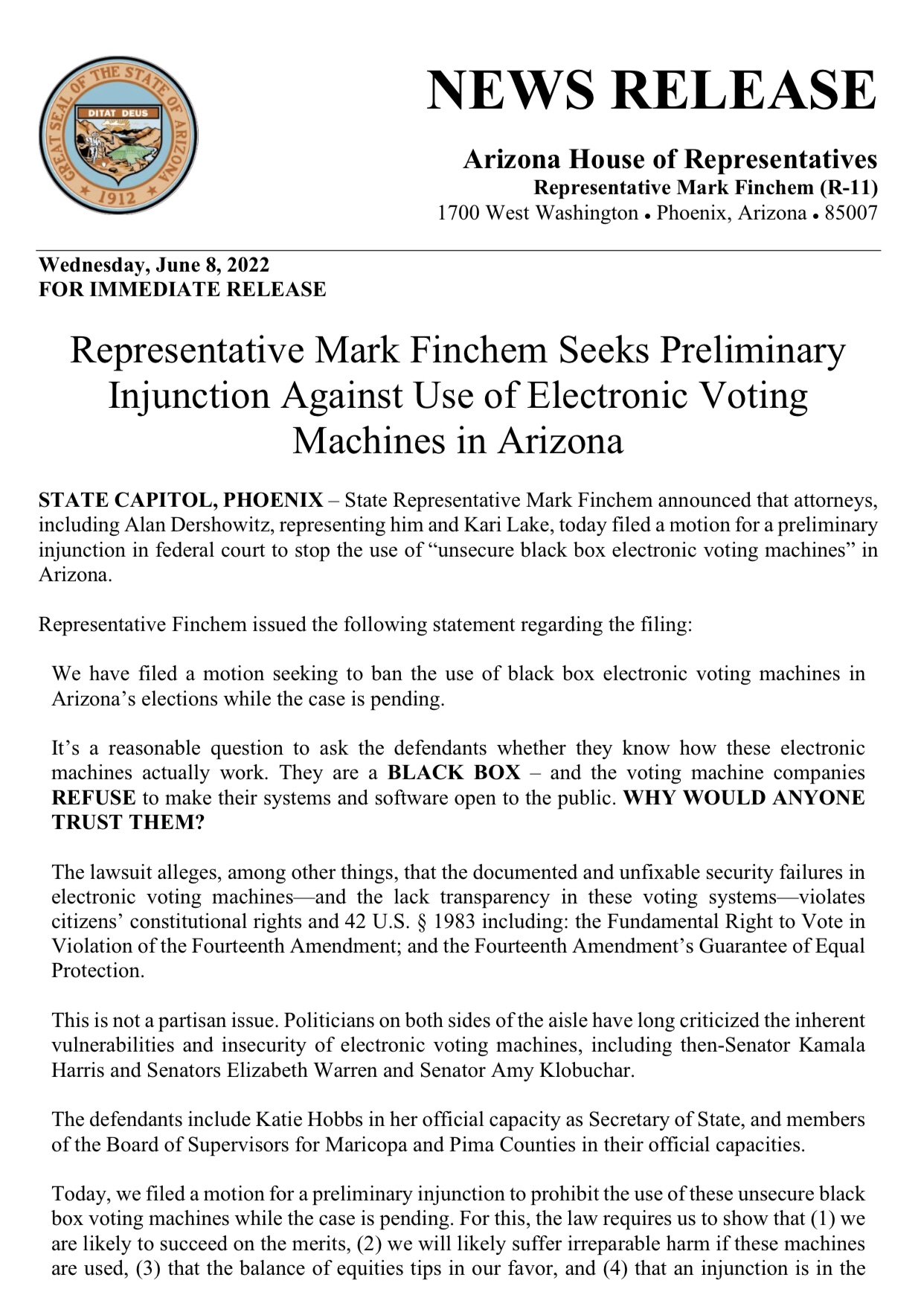 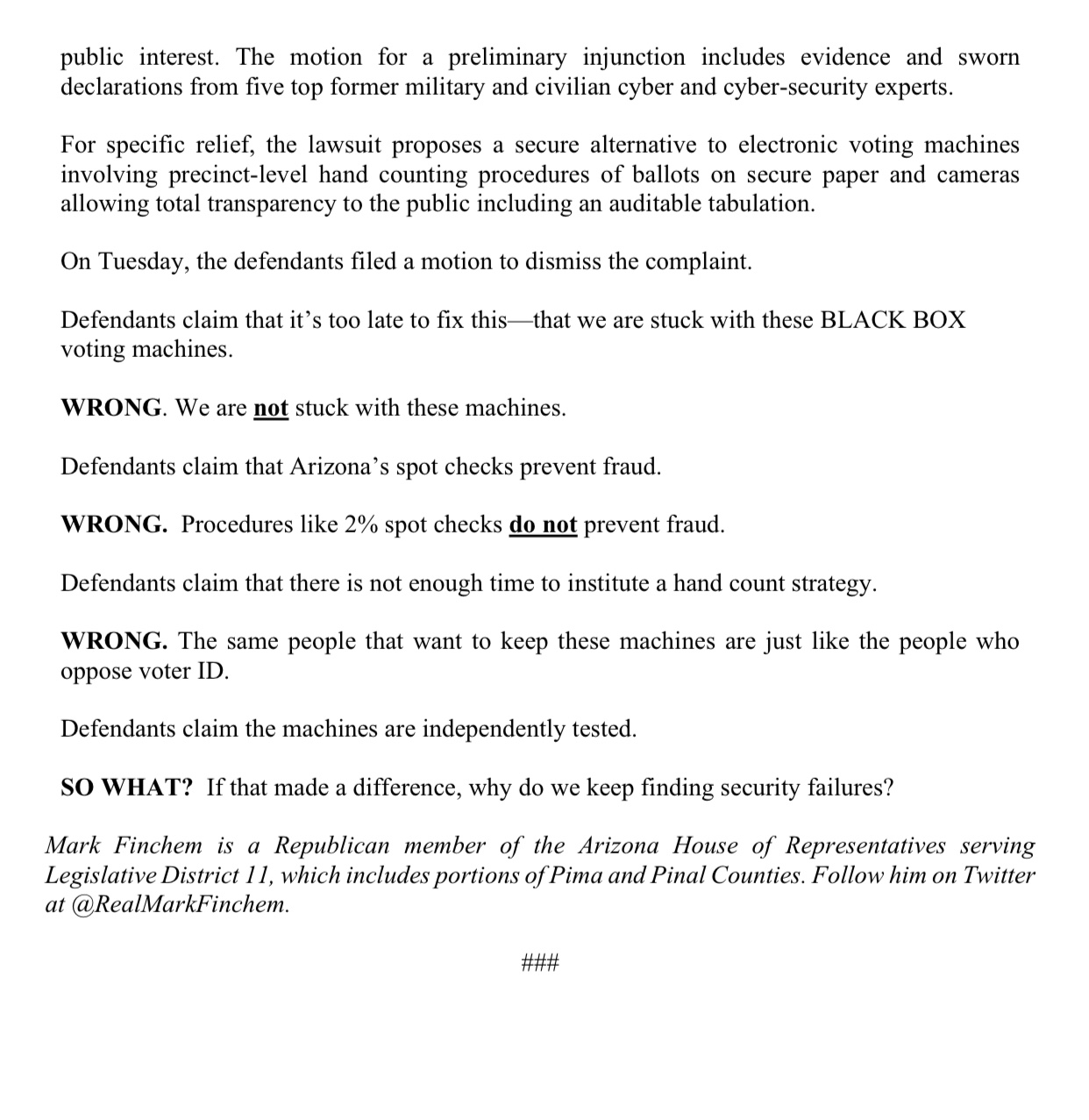 “This is not a partisan issue. Politicians on both sides of the aisle have long criticized the inherent vulnerabilities and insecurity of electronic voting machines, including then-Senator Kamala Harris and Senators Elizabeth Warren and Senator Amy Klobuchar,” Finchem said in the press release.

So wait—Democrats knew about voter machine hacking since 2018 but now refuse to acknowledge it.

Here are Joe Biden and Kamala Harris, the year before elections, saying that we need paper ballots because voting machines can be hacked. pic.twitter.com/zbxxGqsKlL

Related: Kari Lake Issues a Statement after Filing an Injuction to Ban the Use of Electronic Voting Machines in AZ’s 2022 Election