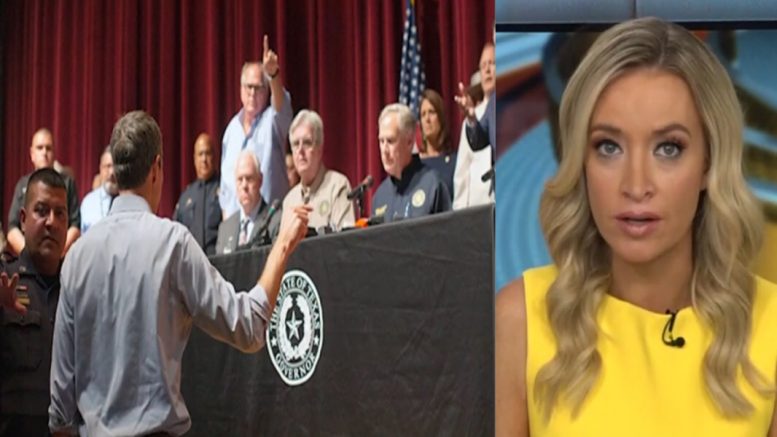 Former press secretary Kayleigh McEnany called Democrat Robert Frances “Beto” O’Rourke’s Wednesday stunt “one of the most shameful things” she “has ever seen from a political actor”.

“I am thinking if you are a parent or a relative of someone who lost a loved one — everyone grieves differently — and maybe some parents could not bare to watch that press conference, but I am sure there were others trying to collect every single detail about how their son or daughter lost their life, what their last moments were like, how long the shooter was in the room, every last detail they could soak up,” McEnany said.

“And to have a Democrat gubernatorial candidate stand up and interrupt local officials is nothing short of shameful,” she expressed during Thursday’s airing Fox News’ “Outnumbered”.

Emily Compagno weighed in, agreeing with McEnany, saying, “An actor indeed, Kayleigh. He’s a performative clown. He’s reprehensible. He’s a joke. I don’t want to give him any more airtime, he’s not worth it. He’s a waste of flesh.”

“Lt. Dan Patrick said it best: ‘You’re out of line. You’re an embarrassment’. The mayor of Uvalde also said it best, he said, ‘You’re out of line. Leave the auditorium. I cannot believe you are a sick son of a bitch who would come to a deal like this to make a political issue.’ That’s unfortunately what we get by that despicable person. I don’t even want to say his name. He’s not worth it,” Compagno added. Video Below

WATCH: Al Sharpton Gets Shouted Down By Protestors In Del Rio: “We Don’t Want Your Racism In Texas. Get Out Of Here!”