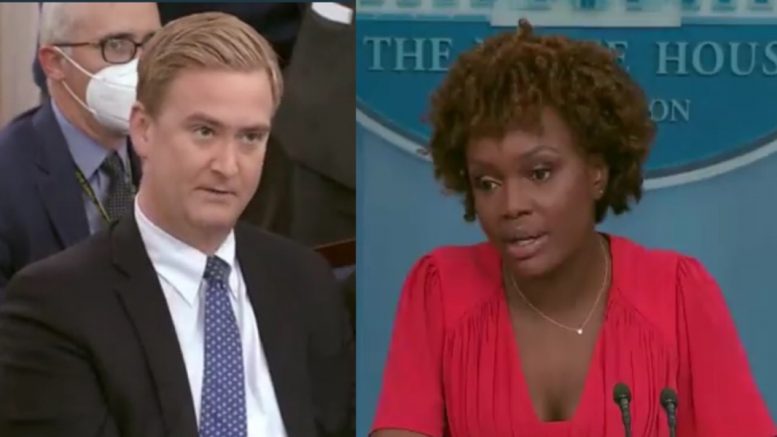 The tweet read: “You want to bring down inflation, let’s make sure the wealthiest corporations pay their fair share”.

“How does raising taxes on corporations reduce inflation … lower the cost of gas, the cost of used cars, the cost of food for every day Americans?” Peter Doocy asked the press secretary.

Jean-Pierre replied while appearing to read a prepared answer from notes: “I think we encourage those who have done very well. Right? Especially those who care about climate change to support a fair tax code that doesn’t charge manufactures, workers, cops, builders a higher percentage of their earnings that the most fortunate people in our nation and not let that stand in the way of reducing energy costs in fighting this existential problem, if you think about that as an example”.

“And to support basic collective bargaining rights as well, right? That’s also important, but … without having a fair tax code, which is what I’m talking about, then all — like manufacturing workers, cops — you know, it’s not fair for them to have to pay higher taxes than the folks who are not paying taxes at all,” she added.

Doocy followed up and asked the press secretary,” But what does that have to do with inflation? The president said, ‘You want to bring down inflation, let’s make sure the wealthiest corporations pay their fair share’. Jeff Bezos came out and tweeted about that. He said, ‘The newly created disinformation board should have reviewed this tweet’. Would you be okay with that?”

Jean-Pierre responded with another seemingly prepared answer from her notes: “Look. It’s not a huge mystery why one of the wealthiest on earth, right, opposes economic agenda that is for the middle class that cuts some of the biggest cost families face –fights inflation for the long haul, and that’s what we’re talking about.”

“That’s why we’re talking about lowering inflation here,” she said. “And adds to the historic deficit reduction the president is achieving by asking the richest taxpayers and corporations to pay their fair share. That is what we’re talking about,” she claimed.

It appears Peter Doocy’s question was not answered. Video Below

You want to bring down inflation?

Let’s make sure the wealthiest corporations pay their fair share.

Mulvaney On A Bipartisan COVID Deal : “Biden Is An Extraordinary Weak Leader… Nobody Really Voted For Joe Biden”