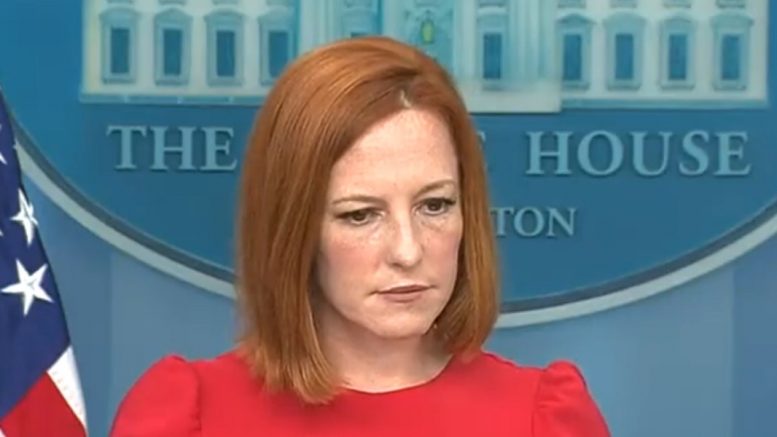 Jean-Pierre, the current the principal deputy press secretary, will become the first openly gay person and first Black woman to hold the role of White House press secretary. The White House said that Jean-Pierre would assume the position on May 13, Morgan Chalfant at The Hill reported.

Jen Psaki released a statement on Twitter following the announcement of her departure from the White House.

Lots to say about how grateful I am to POTUS and FLOTUS and the Biden family for trusting me to serve as Press Sec and plenty of time before my last day to share, but today is about [Karine Jean-Pierre] so a few thoughts on this remarkable woman who will soon be behind the podium every day.

She will be the first black woman and the first openly LGBTQ+ person to serve as the White House Press Secretary. Representation matters and she will give a voice to many, but also make many dream big about what is truly possible.

[Karine Jean-Pierre ]has decades of experience from her early years working in government and politics in NYC, to her years as an outspoken advocate, to serving as a long-time advisor to POTUS back when he was the VP. She is passionate. She is smart and she has a moral core that makes her not just a great colleague, but an amazing Mom and human. Plus, she has a great sense of humor.

One of our first conversations was about how to build a drama free team that focused on doing the job and also supporting each other while playing a role every day in rebuilding trust in government. Grateful to have had her by my side. I can’t wait to see her shine as she brings her own style, brilliance and grace to the podium.

“Karine not only brings the experience, talent and integrity needed for this difficult job, but she will continue to lead the way in communicating about the work of the Biden-Harris Administration on behalf of the American people,” Joe Biden said in a statement. “Jill and I have known and respected Karine a long time and she will be a strong voice speaking for me and this administration.

“Jen Psaki has set the standard for returning decency, respect and decorum to the White House Briefing Room,” he claimed. “I want to say thank you to Jen for raising the bar, communicating directly and truthfully to the American people, and keeping her sense of humor while doing so. I thank Jen her service to the country, and wish her the very best as she moves forward.”

Jean-Pierre, 44, was born in France and is the partner of CNN’s Suzanne Malveaux. They have a young daughter. She worked for the Biden and Obama campaigns, and has served as an NBC and MSNBC political analyst, Kathryn Watson at CBS News reported.

Jeffries: Democrats Are “Committed” To Making The Case To Remove Trump “No Matter What It Takes”