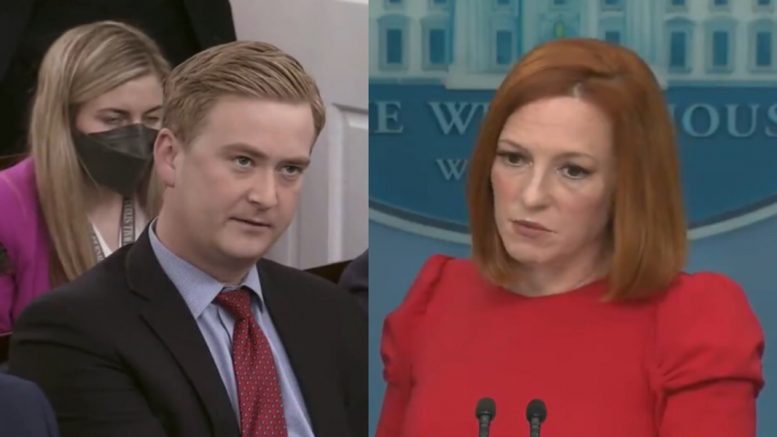 Psaki refused to condemn the leaking, but said the administration’s view is that officials should focus on the opinion’s contents.

“Why would you guys say anything about the leaked draft memo at the Supreme Court?” Doocy asked Psaki during a White House briefing. “In the past, you have declined to comment on leaked materials, so why now?”

“The Supreme Court confirmed this document — it was accurate, even if it was not the final opinion,” Psaki said, referring to a statement released by Chief Justice John Roberts.

Doocy told Psaki that Joe Biden “had a statement out before [the Supreme Court] confirmed it was real”.

“Do you guys think, does the president think the leaker should be punished?” the Fox News correspondent then asked. Continued Below

“That’s up to the Justice Department to determine,” Psaki replied.

“What our focus is on is not getting distracted or taking our eye off the ball about what is most important to people across the country, which is not the leak and the story of the leak. It is the fact that women’s health care is at risk for millions of people across this country,” she claimed.

Republicans have condemned the leak of the draft opinion to Politico, which was published Monday evening. They have called for a criminal investigation into the matter. Video Below

Psaki: “What is most important to people across the country … is not the leak and the story of the leak. It is the fact that women’s health care is at risk for millions of people.” pic.twitter.com/r9GZrypT2Q

Doocy to Psaki on Illegal Immigrants Bussed From Texas to D.C.: ‘Are you Guys Gonna Help Them Find a Place to Stay & Something for Them to do?’