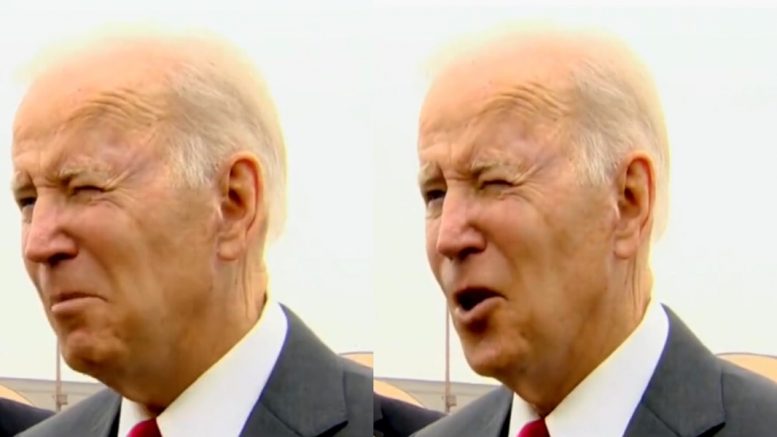 79-year-old Joe Biden reacted to the Monday night leak draft opinion written by Justice Samuel Alito regarding Roe v. Wade, telling reporters in part, “The idea that we’re gonna make a judgment that is going to say that no one can make the judgment to choose to abort a child, based on a decision by the Supreme Court, I think goes way overboard.”

The draft leak obtained by Politico was written in early February. It was not immediately clear if it has been rewritten or revised. The Court has declined to verify or disavow the document. Analysts have suggested the leak may represent an attempt to pressure a Supreme Court justice to change his or her vote on the pivotal case, Fox News reported.

“We hold that Roe and Casey must be overruled,” Justice Samuel Alito writes in the document, labeled the “Opinion of the Court” for the case Dobbs v. Jackson Women’s Health Organization. “It is time to heed the Constitution and return the issue of abortion to the people’s elected representatives.”

Alito also noted that Americans hold “sharply conflicting views” on the subject. “Some believe fervently that a human person comes into being at conception and that abortion ends an innocent life. Others feel just as strongly that any regulation of abortion invades a woman’s right to control her own body and prevents women from achieving full equality. Still others in a third group think that abortion should be allowed under some but not all circumstances, and those within this group hold a variety of views about the particular restrictions that should be imposed.”

While speaking to reporters on Tuesday, Joe Biden warned that overturning Roe v. Wade would be a “fundamental shift” as abortion policy would be up to the states.

“Look, the idea that — concerns me a great deal — that we’re gonna after 50 years decide that a woman does not have a right to choose, within the limits of a Supreme Court decision case. … But even more equally profound is the rational used, and it would mean that every other decision related to notion of privacy is thrown into question,” Biden claimed. Continued Below

“… A whole range of rights are in question. And the idea that we’re letting the states make those decisions … would be a fundamental shift in what we’ve done,” Biden said. “If it becomes the law, and if what is written is what remains, it goes far beyond the concern of whether or not there is a right to choose. It goes to other basic rights. The right to marry. The right to determine a whole range of things.”

“If this decision holds, it’s really quite a radical decision. … But it basically says all the decisions relating to your private life, who you marry, whether or not you decide to conceive a child or not, whether or not you can have an abortion — a range of other decisions — on how you raise your child. … It’s a fundamental shift in America’s jurisprudence,” he said.

” … The idea that we’re gonna make a judgement that is going to say that no one can make the judgement to choose to abort a child, based on a decision by the Supreme Court, I think goes way overboard,” Biden stated. [Emphasis added]. Video Below

Major flub by Biden, who just moments ago talked about "the decision to abort a child." If it is a child, then the "decision to abort" is actually murder and thus illegal. Unsurprisingly, his handlers scurried him away from reporters immediately after he said this. pic.twitter.com/ugxV1cvRwA