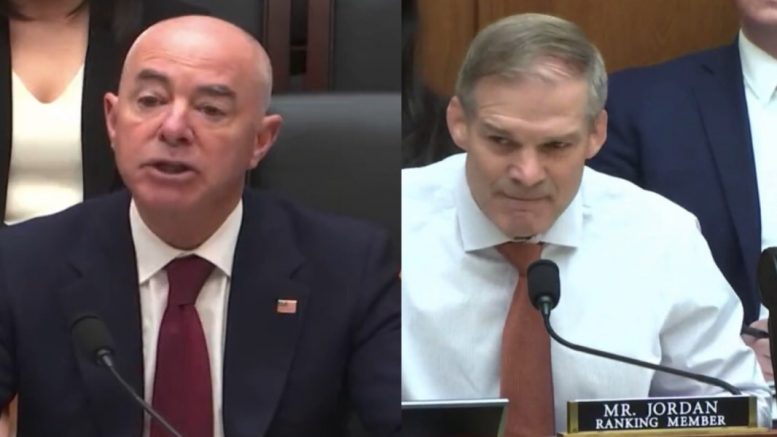 House Judiciary Ranking Member Jim Jordan (R-OH) ripped Alejandro Mayorkas on Thursday for “the chaos on our southern border” telling the Department of Homeland secretary that it is “intentional” and suggested he is “intentionally, deliberately, in a premeditated fashion, executing a plan … to overwhelm our country with millions and millions of illegal migrants.”

“It’s intentional. It has to be. The chaos on our southern border is not an accident. It’s deliberate, it’s on purpose, it’s by design,” Rep. Jordan said.

The Ohio congressman pointed out that career politician Joe Biden “said on day one ‘There will be a moratorium of deportations'”.

“He ended remain in Mexico, he terminated agreements with northern triangle countries, and he stopped building the wall. Those polices, done intentionally, have led to all kinds of bad outcomes. First, … we get a record number of migrants coming to the border — 2.4 million, and that’s the one we know about,” the House Judiciary Committee ranking member said.

Rep. Jordan noted of the illegal immigrants: “That doesn’t count the so-called got-a-ways who get in, that we don’t have an accurate count, but we know it’s a big number.”

“Paying cartels, smugglers, all these people, paying bad guys to get them into the United States, and those cartels aren’t just moving people, they’re moving drugs as well,” he explained. “Drugs like fentanyl that is killing so many Americans, causing so much heartache for so many American families. And drugs get in because of the stress — 2.4 million migrants put on our agents”. Continued Below

“In the 15 months Joe Biden has been president, 2,498,224 illegal migrants have been apprehended at our border. Hundreds of thousands of others that we didn’t catch and got-a-ways that have entered our country, and the secretary says, ‘The border is secure'” he noted.

Rep. Jordan also detailed the number of illegal aliens coming across the border each month, telling Mayorkas he is “completely out of touch with the American people”, adding that next month’s numbers will be even higher when Title 42 ends. Video Below

Rep. Jordan quoted a statement Mayorkas made last September: “Our border is secure, and we are executing our plan”.

“The first part of the sentence was false. We know that. We know the numbers. We know what’s happening on the border; everyone understands it. The second part, ‘We are executing our plan’ … he was telling us the truth, and that should frighten us all,” the Ohio lawmaker expressed.