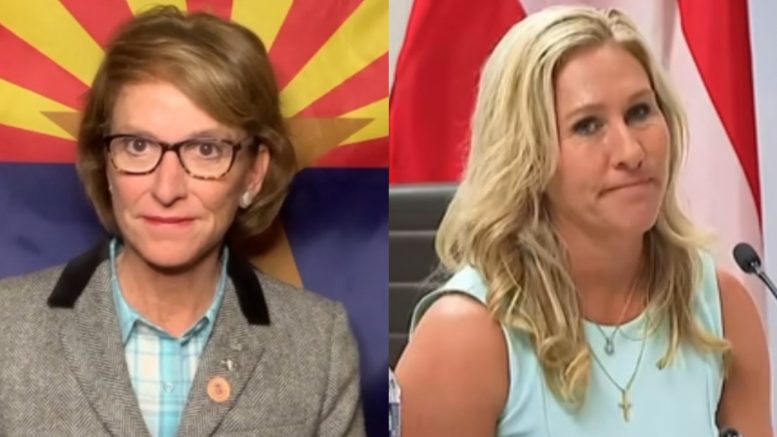 On Monday, a federal judge ruled that a lawsuit filed with the Georgia Secretary of State seeking to block Rep. Greene from running for reelection could proceed, according to Reuters.

Related Article: Rep. Greene Sounds Off After Bannon Is Indicted For Contempt Of Congress: “Commies Always Go After The Strongest First”

As reported by RSBN:

The suit is based on the claim that Greene is “unfit” for office because her supporters were allegedly involved in the so-called “insurrection” of Jan. 6, 2021.

On Wednesday, RSBN’s own Brian Glenn interviewed Rep. Greene to discuss the lawsuit. Greene stated during the interview that the lawsuit is a “frivolous case that should be completely thrown out… They are trying to rip my name off the ballot with these fake claims about January 6th and about me.”

Sen. Rogers later weighed in on the latest developments, when she argued that Rep. Green has not yet had “due process the accusation of insurrection” and that Democrats are only trying to “distract.”

“[Rep. Greene] was never tried or convicted of insurrection. She has had no due process with the accusation of insurrection,” Rogers tweeted. “Therefore, she should stay on the ballot. Close and shut case. If this court rules otherwise, it will be overturned. They are doing this to distract.”

.@RepMTG was never tried or convicted of insurrection. She has had no due process with the accusation of insurrection. Therefore, she should stay on the ballot. Close and shut case. If this court rules otherwise, it will be overturned. They are doing this to distract.

In ending, here is a recent statement from Rep. Greene over who should have the full power to choose members of Congress.

It’s one of the most important issues in our country.

When the People lose their right to vote & their freedom to choose their representatives, our country is lost.

Only the People have the right to choose who they send to Congress.

Reporter Implies MTG Is Being Racist, Mo Brooks Steps To The Podium & Levels Him: “Egregious & Wrong!”