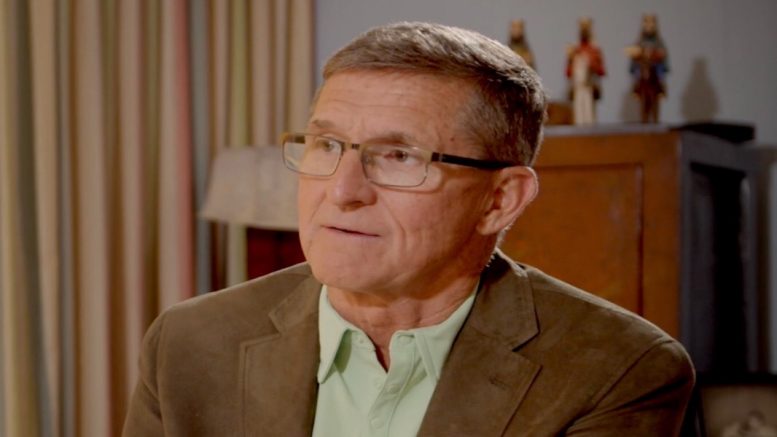 Retired Army Lieutenant General Michael Flynn on Monday shared a video clip on Telegram of when Joe Biden, during a 2020 presidential debate, claimed that his son’s laptop email story was Russian disinformation — based off of a letter that was signed by 50 former national intelligence officials.

Flynn said, “It was all a lie”, and suspects “there will be accountability” for the “criminals involved in dangerously hurting our country” as a result of Special Counsel John Durham’s investigation.

During the Oct. 22, 2020, debate, 45th President Donald Trump suggested the emails showed Biden was “a corrupt politician” and called his scandal-scarred son’s computer “the laptop from hell.” Biden responded that “there are 50 former national intelligence folks who said that what this, he’s accusing me of, is a Russian plant. … They have said that this has all the characteristics — four, five former heads of the CIA, both parties — say what he’s saying is a bunch of garbage”, New York Post reported.

“I pray that Durham will come down hard on the criminals involved in dangerously hurting our country. Not only did it seriously affect my family and I, but the president and his entire family, the presidency of the United States of America and the entire nation—every single one of us,” he said.

“This conspiracy was and remains totally unacceptable and there will be accountability,” Flynn suspects. Continued Below

He also shared a video clip of Joe Biden’s remarks, during the final debate, where Biden invoked the letter to discredit his son’s laptop story, which was first reported by the New York Post.

The New York Times recently admitted that damning emails and files exposed from Hunter’s laptop were, in fact, authentic, as was The Post’s report on how they obtained it.

[The] 51 former “intelligence” officials who cast doubt on The Post’s Hunter Biden laptop stories in a public letter really were just desperate to get Joe Biden elected president. And more than a year later, even after their Deep State sabotage has been shown again and again to be a lie, they refuse to own up to how they undermined an election, as reported by the New York Post. Continued Below

The officials, including CNN pundit and professional fabricator James Clapper — a man who was nearly charged for perjury for lying to Congress — signed a letter saying that the laptop “has the classic earmarks of a Russian information operation”, per the Post.

Biden cited their letter during debate.

Biden: "There are 50 former national intelligence folks who said that what he's accusing me of is a Russian plan…5 former heads of the CIA…say what he's saying is a bunch of garbage…" https://t.co/1qN3JoluBi