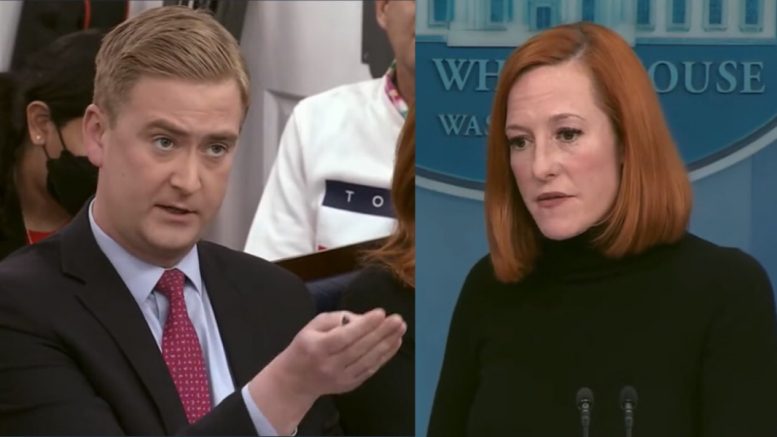 Fox News White House correspondent Peter Doocy grilled press secretary Jen Psaki on Monday over whether she and Joe Biden will apologize to mounted border patrol officers after they condemned and accused them of whipping Haitian migrants based on photos circulated on social media in September.

It was widely reported from legacy media that the border control agents were “whipping” the migrants, though it was revealed they were actually handling split reins for their horses.

“We’ve been told that the mounted border patrol officers — the president accused of whipping migrants — have been notified they will not face criminal charges. So when is the president going to apologize to them?” Doocy asked Psaki.

“There is a process and an investigation that’s gone to the Department of Homeland Security. I don’t have any update on that,” Psaki claimed.

“You accused these officers of ‘brutal and inappropriate measures’. Now that they’ve been told they will not be criminally charged, will you apologize?” Doocy then wondered.

Psaki deflected, telling the Fox News correspondent, “And Peter, there was an investigation into their behavior. So that investigation is playing out. Whenever there — it’s uh, going to be announced, the Department of Homeland Security will announce that. And I’m sure we’ll have a comment after that”. Video Below

Peter Doocy asks Psaki when Biden will apologize to the mounted border patrol officers who were accused of whipping migrants. pic.twitter.com/SYSCRiEm2C

The Del Rio mounted border patrol agents accused of whipping migrants have been cleared, but an apology from the Biden administration is unlikely. https://t.co/ncDJfsb4Y6

First #Mayorkas said the border patrol weren’t “whipping” migrants but did a 360 after Joe Biden already decided the outcome of his ‘independent inquiry’by saying “people will pay” He’s so weak he’ll throw his own ppl under the bus pic.twitter.com/yDup5BlsqC

.@PressSec on images appearing to show border patrol agents whipping Haitian migrants at the U.S. southern border: "I have seen some of the footage. I don't have the full context, I can't imagine what context would make that appropriate."

.@PressSec doubles down on the lie that border patrol agents were "whipping" Haitian migrants at the border, claiming that CBP officers were using "brutal and inappropriate measures against innocent people." pic.twitter.com/JFTcF0HwHR

The Border Patrol agents falsely accused of “whipping” migrants have now been CLEARED of wrongdoing.

In September, Kamala Harris called for “consequences” and compared the images “to slavery.”pic.twitter.com/KRUchFtEeK

Watch @VP react to the Border Patrol agents in Texas who were on horseback whipping Hatian migrants.

The investigation needs to be thorough but executed quickly and the consequences must be severe!

(Related: Peter Doocy To Psaki: “Has President Biden Ever Been to The Southern Border?”)