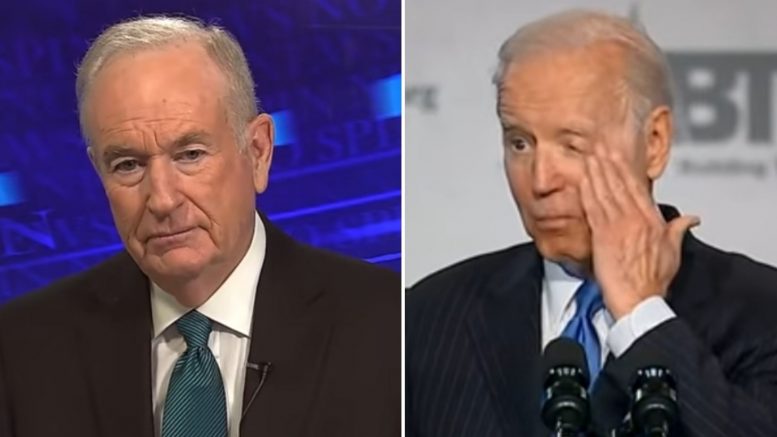 “Things are getting worse,” Bill O’Reilly determined in regards to multiple crisis Joe Biden’s administration is facing, specifically inflation. “And you know what Biden says? ‘It’s Putin’s fault. Putin did it, the Putin price rises.'”

“So this is catastrophic — and that’s not hyperbole — to the American workers and the poor,” he added. “And the Biden administration will try to give away more money to families and the poor to try to take the edge off, but that will cause more inflation!”

O’Reilly then predicted, “It’s all going to ground to a halt in November when the Republican Party takes control of the House and Senat, which it will because people aren’t going to be voting for the Republicans. They’ll be voting against Biden, just as they voted against Trump… Now it’s going to be, ‘I don’t care who’s in there as long as it’s not Biden.'”

“Things are going to get worse for Biden. This Hunter Biden thing, that’s not going away. The border thing after they lift the COVID restrictions down there, that’s going to explode. I don’t know what Putin is going to do, but he’s holding on hoping that the Biden administration collapses… which it might.”

“What does it mean when the Biden administration collapses?” O’Reilly asked. “It means they can’t govern at all, and that will happen if they lose control of the House and Senate. Biden will never get anything passed, nothing. So for two years he’ll sit in the White House… he’ll be there and he won’t be able to do anything.”

“He’s going to be just there. He might as well move to Delaware,” O’Reilly declared. Video Below