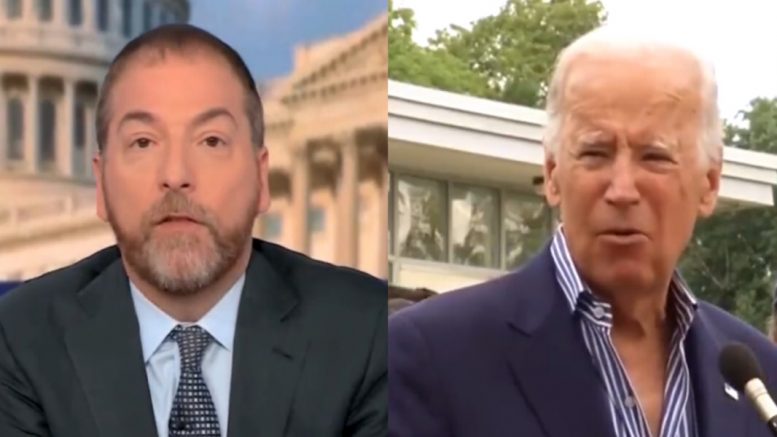 “A new CNBC survey out this morning, conducted by the same two polling firms that do the same MSNBC poll, have President Biden’s job approval rating at a lackluster 38%. It’s down three points since their December survey, 15 points underwater. That’s 2 points from our survey,” MSNBC’s Chuck Todd said on Thursday of CNBC’s survey.

Todd explained: “When you look deeper into this poll, it sure looks like inflation and the overall economic attitudes are just driving those numbers”.

MSNBC: As #Bidenflation soars, Biden's approval is at a “lackluster 38%.”

“A majority, 56% believe there will be an economic recession during the next 12 months. Bottom line, Americans see rising costs as the single sum of pending economic doom.” pic.twitter.com/aKp0pOFYtC

Amid soaring inflation, 47% of the public say the economy is “poor,” the highest number in that category since 2012. Only 17% rank the economy as excellent or good, the lowest since 2014.

Only one in five Americans describe their personal financial situation as “getting ahead,” the weakest showing in eight years. Most say they are “remaining in place,” and one in 10 say they are “falling backward.” Meanwhile, 56% say they expect a recession in the next year — a level only achieved in the survey during an actual recession. Continued Below

Biden’s approval rating is at an all-time low, according to another poll conducted by Quinnipiac and released on Wednesday. While 33 percent of Americans approve of the way Joe Biden is handling his job, 54 percent disapprove with 13 percent not offering an opinion.

“Fox & Friends Weekend” co-host Pete Hegseth said of the poll, “Sometimes you just just have to stop and say 33? That low, this fast? Alarm bells have to be going off. The question is not whether or not it will be biblical, it’s which one, is it a flood, drought, plague, locusts? I don’t know which calamity it’s going to be. We can tick down the items that we often do: inflation, the border, crime, illegal immigration, whatever you want to focus on. Ukraine, Afghanistan, we can go down the list.”

“…But if you feel like your party has lost sanity, that’s where the independent numbers are even lower, 26%. You just say the adults aren’t in charge over there, and you cannot undo that with a press release or a hashtag. Their backs are against the wall for all the right reasons. They got in bed with the crazy left, and now they are associated with them.”

(Related: Tucker: Let’s Say You’re President & Your Poll Numbers Make You Somewhat Less Popular than Chlamydia – What Do You Do?)