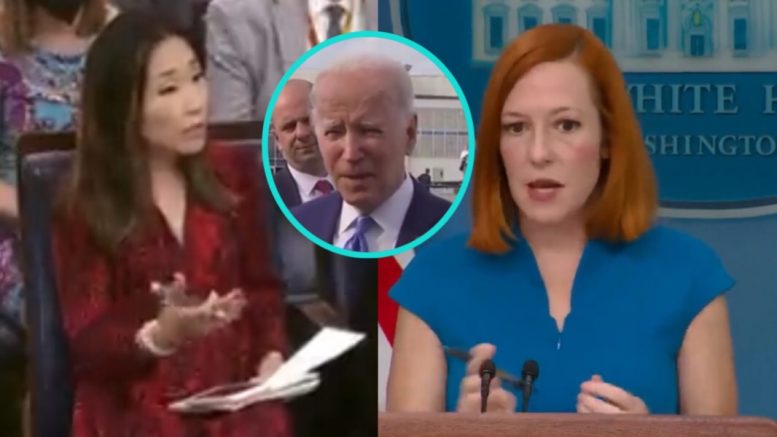 Joe Biden on Tuesday accused Russia of committing genocide in Ukraine, saying “it’s become clearer and clearer” that Russian President Vladimir Putin “is just trying to wipe out even the idea of being Ukrainian.”

In comments to reporters on Tuesday, Biden said, “Yes, I called it genocide, because it’s become clearer and clearer that Putin is just trying to wipe out even the idea of being Ukrainian, and the evidence is mounting. … It looks different than last week. More evidence is coming out literally of the horrible things that the Russians have done in Ukraine. And we’re gonna only learn more and more about the devastation, and we’ll let the lawyers decide internationally whether or not it qualifies, but it sure seems that way to me.”

During a White House press briefing on Wednesday, press secretary Jen Psaki was asked about Biden’s “genocide” remarks and whether or not there should be an asterisk “next to anything the president says”, likely referring to the several instances where the White House had to clarify or backtrack comments made by the 79-year-old Democrat.

“Does this not send a signal to the world that there kind of is an asterisk next to anything the president says?” a reporter asked Psaki on Wednesday.

Psaki claimed, “When the president ran, he promised the American people he would ‘shoot from the shoulder’ — is his phrase that he often uses tell it to them straight. And his comments yesterday, not once, but twice, and on war crimes, are an exact reflection of that. … The president was calling it like he sees it, and that’s what he does.”

The reporter followed up, saying, “If I could ask it this way: do you think there is any danger to global leaders, including Vladimir Putin … if they can’t be sure they hear words coming out of the president’s mouth whether he is stating a personal opinion versus making a statement about U.S. policy?” Continued Below

Asked if she had an “example of somebody who is confused?” the reporter immediately referenced French President Emmanuel Macron, who declined to characterize the Russian military’s actions in Ukraine as genocide, saying that “an escalation of rhetoric” is harmful.

Macron said Wednesday that his goal is to “stop this war and rebuild peace” and not use rhetoric like “genocide” to escalate tensions with Russia. However, he called the Kremlin’s actions “war crimes,” following the trend of Western allies.

Psaki said Biden was “speaking to what those atrocities are and what he’s seeing on the ground,” adding, “A number of other leaders have done exactly that. It does not change policy in the sense that we’ve seen these atrocities, unfortunately for weeks now.” Video Below

The reporter then wondered, “If the U.S. were to legally determine that what is happening in Ukraine is genocide, what would, sort of, the legal obligations from the United States be at that point?”

BIDEN: "Your family budget, your ability to fill up your tank, none of it should hinge on whether a dictator declares war and commits genocide a half a world away." pic.twitter.com/JC1eoqqhQy

Biden: I called it genocide because it has become clear that Putin is just trying to wipe out the idea of even being able to be a Ukrainian pic.twitter.com/h4SBfDQuFW

While Biden had accused Putin and Russian forces of committing war crimes, the U.S. had previously refrained from using the term “genocide” to describe Russia’s actions in Ukraine, Ivana Saric at Axios reported.

(Related: Psaki: Biden ‘Was the Vice President the Last Time Russia Invaded Ukraine–This is a Pattern…’)