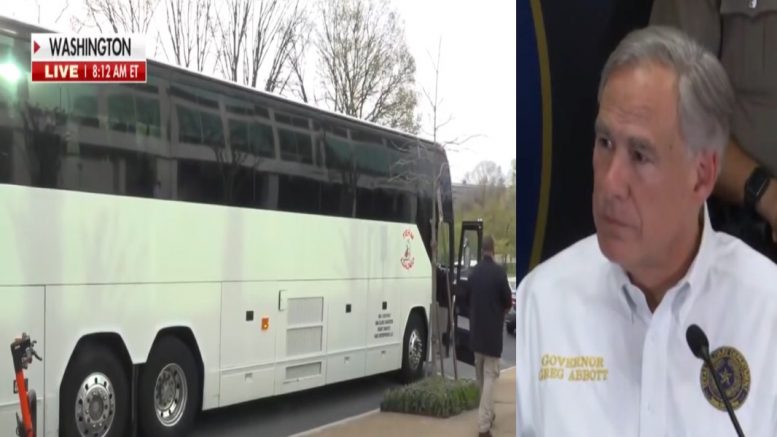 On Wednesday morning, the first bus from Texas arrived to Washington, D.C., dropping off dozens of illegal immigrants as part of Governor Abbott’s new plan to counter federal immigration policies and ahead of the elimination of the Title 42 health policy, currently in place at the southern border — which will end next month.

The bus pulled up at approximately 8 a.m. local time, blocks away from the U.S. Capitol building. They came from the Del Rio sector in Texas, after coming to the U.S. from Colombia, Cuba, Nicaragua, and Venezuela, as reported by Fox News.

Governor Abbott insists that the federal government is failing to adequately address the situation.

“Texans demand and deserve an aggressive, comprehensive strategy to secure our border—not President Biden’s lackluster leadership,” Abbott said in a statement. Continued Below

“As the federal government continues to roll back commonsense policies that once kept our communities safe, our local law enforcement has stepped up to protect Texans from dangerous criminals, deadly drugs, and illegal contraband flooding into the Lone Star State,” he said.

“Texas will always be a law-and-order state, and I thank our law enforcement officers who have answered the call to protect and serve their fellow Texans in the federal government’s absence in securing our border,” Governor Abbott stated.

Title 42 went into effect under 45th President Donald Trump in March 2020 and has allowed border officials to immediately expel migrants who attempt to enter the US without allowing them a chance to claim asylum. The policy has been used to remove migrants more than 1.7 million times, according to official estimates. Continued Below

“We are sending them to the United States Capitol where the Biden administration will be able to more immediately address the needs of the people that they are allowing to come across our border,” Governor Abbott said last week.

.@GregAbbott_TX: “Texas is providing charter buses to send these illegal immigrants who have been dropped off by the Biden Administration to Washington D.C.” pic.twitter.com/JP1LKS0PZa

Related: Gov. Abbott: ‘Texas is Providing Charter Busses to Send These Illegal Immigrants, Who Have Been Dropped off by the Biden Administration, to Washington, D.C.’)