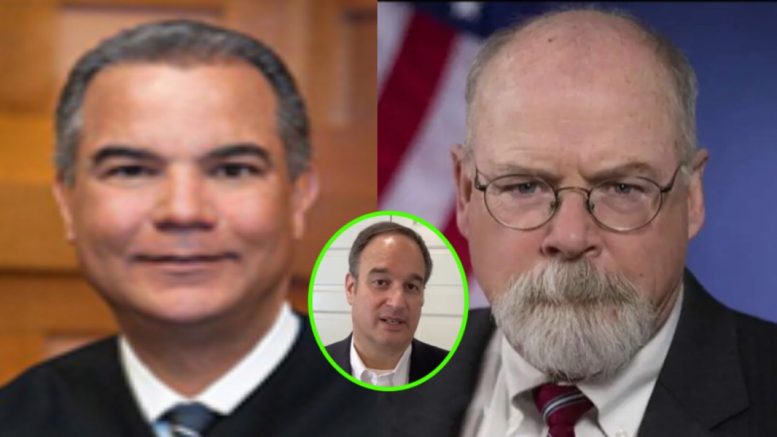 U.S. District Judge Christopher Cooper on Wednesday ruled that Special Counsel John Durham can proceed with his office’s prosecution against former Clinton campaign lawyer Michael Sussman with ties to Democrats for making a false statement to the FBI in 2016.

Cooper denied a motion from Sussmann, filed in February, to dismiss the charge against him, which stems from a 2016 meeting with former FBI lawyer James Baker to present evidence regarding the interests he was representing in pushing to the FBI the Alfa Bank/Trump Organization hoax.

Judge Cooper said in his decision that the legal challenges raised by Sussmann’s lawyers against the Durham indictment may have some merit but cannot be fully ruled on in the pretrial stage.

“Sussmann’s sole argument for dismissal is that, even taking the allegations in the Indictment as true, his purported misrepresentation to Baker was immaterial as a matter of law and therefore cannot support a conviction under § 1001. The Court will deny the motion,” the federal judge wrote in a six-page decision.

“Specifically, Sussmann allegedly told Baker that he was not attending the meeting on behalf of any client when, in fact, he had assembled and was conveying the information on behalf of two specific clients: (1) a technology-industry executive named Rodney Joffe and (2) the Hillary Clinton presidential campaign,” Cooper wrote. Continued Below

“The FBI opened an investigation based on the information Sussmann provided, but ultimately determined that there was insufficient evidence to support the existence of a communication channel between the Trump campaign and the Russian bank,” Cooper wrote. “Sussmann has pled not guilty to the charge and denies lying to the FBI.”

Durham, in a February 11 filing with the “Factual Background” in question, alleged Sussmann provided two U.S. government agencies with information from a tech executive that attempted to tie Donald Trump, who was a presidential candidate at the time, to Russia-based Alfa Bank.

The tech executive has since identified himself as Rodney Joffe. Continued Below

Durham alleged that Sussmann, Joffe and Joffe’s associates “exploited” internet traffic about a “particular healthcare provider,” Trump Tower, Trump’s Central Park West apartment building and the Executive Office of the President of the United States in order to “establish ‘an inference’ and ‘narrative’” tying Trump to Russia.

Durham alleges Sussmann’s “billing records reflect” that he “repeatedly billed the Clinton campaign for his work” on the Alfa Bank allegations.

Michael Sussmann's motion to dimiss has been denied.

They're going to trial on May 16, absent a plea deal or other developments (continuance, etc).

(Related: ‘Indisputable Evidence’: Trump Declares After Durham Reveals DNC Allies ‘Exploited’ DNS Traffic to Gather Intel on the ‘Executive Office of the President of the U.S.’)