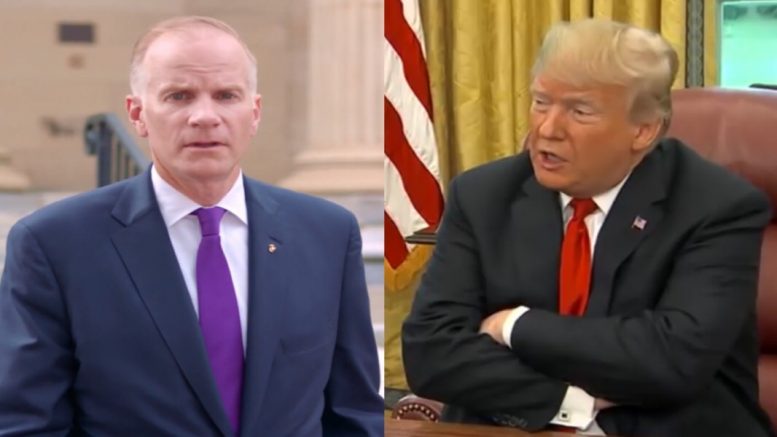 45th President Donald J. Trump issued an email statement on Tuesday announcing that he “will not be endorsing” Pennsylvania Republican gubernatorial candidate Bill McSwain and accused the former U.S. attorney of doing “absolutely nothing on the massive Election Fraud that took place in Philadelphia and throughout the commonwealth”.

Trump urged voters not to cast their ballot for “coward” McSwain in the primary.

“One person in Pennsylvania who I will not be endorsing is Bill McSwain for Governor. He was the U.S. Attorney who did absolutely nothing on the massive Election Fraud that took place in Philadelphia and throughout the commonwealth,” President Trump said from his “Save America” PAC.

“He said Barr told him not to do anything (because Barr was afraid of being impeached by the Democrats), but he should have done his job anyway. Without free and fair Elections, we don’t have a Country,” he continued.

“Do not vote for Bill McSwain, a coward, who let our Country down,” Trump urged. “He knew what was happening and let it go. It was there for the taking and he failed so badly. Many of the U.S. Attorneys were probably told not to do anything by Barr. Hence, our Country is going to hell.”

“True the Vote’s findings are determinative and Bill McSwain should be ashamed of himself, as should many Republican leaders who didn’t act. They said Philadelphia and Detroit were two of the most corrupt places in the Country, with Georgia being one of the most corrupt states!” the 45th President added, including a link to True the Vote’s Catherine Engelbrecht and Gregg Phillips on “The Charlie Kirk Show” who revealed their findings on Monday. Continued Below

“I’m proud of my record as U.S. Attorney. I’ve prosecuted and put people behind bars who committed voter fraud, and put rioters and looters in jail,” McSwain said in a statement to Newsweek. “When I’m Governor, we’re going to get back to a voting system that everyone has confidence in, and that begins with repealing the unconstitutional mail-in balloting law, Act 77, that Doug Mastriano voted for.”

“One person in Pennsylvania who I will not be endorsing is Bill McSwain for Governor. He was the U.S. Attorney who did absolutely nothing on the massive Election Fraud that took place in Philadelphia and throughout the commonwealth. He said… pic.twitter.com/DcBVx90TKN

Former Attorney General William Barr pushed back Tuesday against suggestions from former President Donald Trump and a former federal prosecutor in Pennsylvania that federal authorities were ordered not to aggressively investigate claims of fraud during the 2020 presidential election.

Trump declared in a statement sent to reporters Monday evening that the former U.S. attorney in Philadelphia, William McSwain, was blocked from pursuing assertions of election tampering.

“U.S. Attorney from the Eastern District of Pennsylvania was precluded from investigating election fraud allegations. Outrageous!” Trump said in the statement, which was accompanied by a two-page letter from McSwain seeking Trump’s endorsement in the Keystone State governor’s race.

“I wanted to be transparent with the public and, of course, investigate fully any allegations. Attorney General Barr, however, instructed me not to make any public statements or put out any press releases regarding possible election irregularities,” McSwain wrote.

True the Vote’s Catherine Engelbrecht and Gregg Phillips on “The Charlie Kirk Show”:

(Related: Trump to Reporters: ‘A Lot of Things Are Going on in Pennsylvania’ – ‘It Was a Scam’)