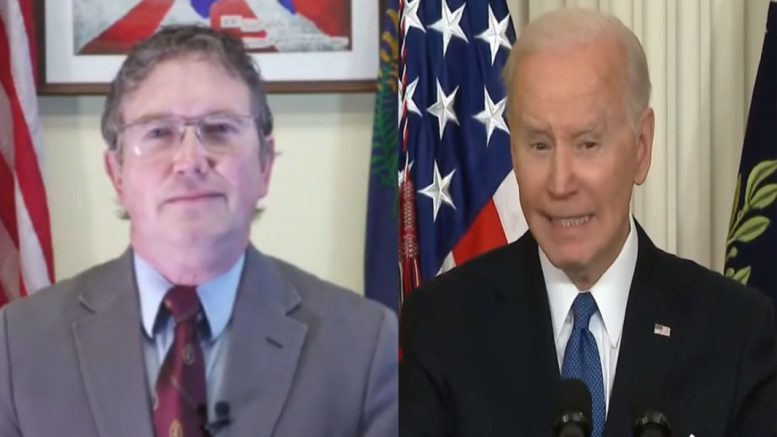 Rep. Thomas Massie (R-KY) fired back against the Biden administration’s upcoming rule on so-called “ghost guns”, calling it unconstitutional and pointing out that “Congress makes law”, not 79-year-old Joe Biden.

“The Constitution does not authorize the federal government to prevent you from making your own firearm. This a fact that has been recognized for 200+ years. Also, Article 1, Section 1 (literally the first operative sentence in the Constitution) says Congress makes law, not POTUS!” the Kentucky congressman tweeted on Sunday.

Rep. Thomas Massie tweeted a screenshot of a headline from Fox News and cited the Constitution:

The Constitution does not authorize the federal government to prevent you from making your own firearm. This a fact that has been recognized for 200+ years. Also, Article 1, Section 1 (literally the first operative sentence in the Constitution) says Congress makes law, not POTUS! pic.twitter.com/vTFRvKYTVi

Biden will nominate Steve Dettelbach, an Obama-era former U.S. attorney from Ohio, as his nominee to lead the Bureau of Alcohol, Tobacco, Firearms and Explosives on Monday, according to senior administration officials. The president will also deliver remarks from the Rose Garden on measures his administration is taking on gun control and cracking down on “ghost guns,” which are privately made and don’t have serial numbers.

The Biden administration plans to reclassify gun kits to qualify as firearms under the Gun Control Act, requiring manufacturers to be licensed and include serial numbers on the kits. Commercial sellers will also be required to run background checks before sales of the kits, according to senior administration officials. Continued Below

Some users on Twitter also weighed in over Rep. Massie’s response:

.@RepThomasMassie is spot on – Biden’s proposal to create a comprehensive national gun registry and end the online sale of gun parts without the passage of a new law exemplifies his disregard for the Second Amendment. https://t.co/lIQRPpwQRr

If everyone in Congress could be more like @RepThomasMassie

America would be a better place. https://t.co/f2YYotztke

(Related: Beto O’Rourke Appears to Flip-Flop on His AR-15 Remarks: ‘I’m Not Interested in Taking Anything from Anyone’)