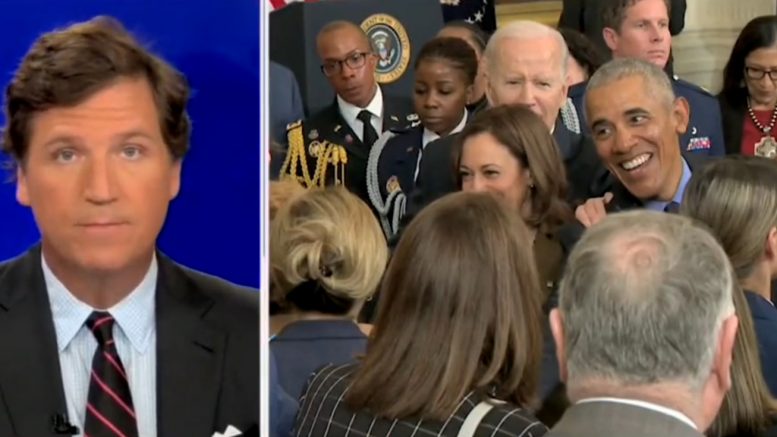 Tucker Carlson weighed in on video clips that appeared to show Joe Biden being “shunned” and “ignored” by former president Barack Obama and others at the White House on Tuesday.

As reported earlier by The Freedom Times, “Following an event at the White House with Joe Biden, Kamala Harris, and Barack Hussein Obama over the Affordable Care Act on Tuesday, Biden appeared to be wandering around alone as guests seemed more interested in talking to the former president.”

Related Article: Biden Appears to be ‘Ignored’ at ‘His Own Party’ Following an Event with Obama at the White House

“Joe Biden is now the most unpopular person in virtually any room he enters,” declared Tucker before rolling video clips showing two different angles of the awkward moment.

He continued, “Biden desperately tried to get Obama’s attention. He puts his hand on Obama’s shoulder, even calls him ‘Barack’ like they’re friends, but Obama blows him off. He acts like Biden is not even there. Ask yourself if you have ever in your life seen anything sadder than this.”

‘I’m Not Resigning, but You Should’: Kellyanne Conway Resists Biden after Demanding She Resign from Air Force Academy Board of Visitors