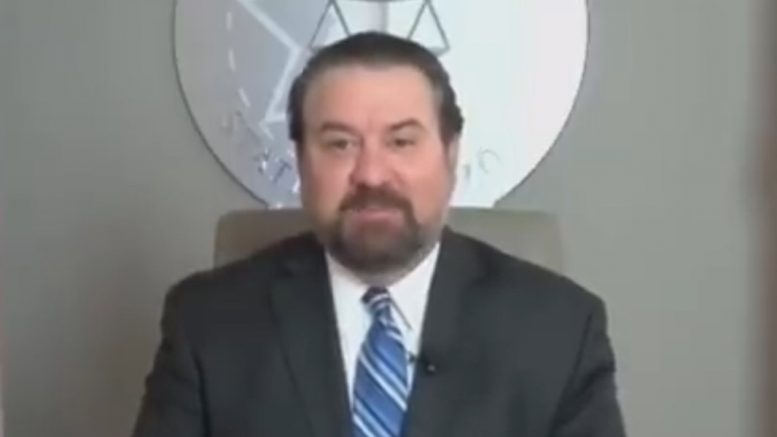 Arizona Attorney General Mark Brnovich (R) sent a letter to Senate President Karen Fann on Wednesday offering an update on his agency’s review of the findings Fann delivered to him related to the forensic audit conducted in Maricopa County over the 2020 election.

“As our state’s chief law enforcement officer, I am very concerned by any potential vulnerabilities in our state’s election systems, including those that the audit and other complaints have alleged. The EIU’s review has uncovered instances of election fraud by individuals who have been or will be prosecuted for various election crimes,” Attorney Brnovich wrote. [Emphasis added]

“The EIU’s review is ongoing and we are therefore limited in what we can disclose about specific criminal and civil investigations. Thus, this interim report will focus on what our office can presently share and the current status to our review,” he stated. [Emphasis added]

In the interim report, Mr. Brnovich outlined areas of concern and provided conclusions regarding mail-in-ballots, signature verification, drop boxes, and the use of private, nongovernmental grant monies for various election purposes.

“We can report that there were problematic system-wide issues that relate to early ballot handling and verification,” said the report. “… With each passing election, Americans on all sides of the political spectrum have less confidence in the integrity of our elections. This is a crisis that should be addressed immediately with bipartisan solutions grounded in the rule of law.” Continued Below

AG Mark Brnovich posted the letter on Twitter Wednesday and wrote, “I just dropped off our initial review of the 2020 election audit to President Fann. We can report that there are problematic system-wide issues that relate to early ballot handling and verification”.

Senate President Karen Fann expressed her gratitude to AG Brnovich for providing an update over the EIU’s investigation, writing on Twitter, “Thank you AG Brnovich for staying committed to the election integrity issue.”

“This is a great start and we look forward to future reports as your investigation continues,” she said. Continued Below

I just dropped off our initial review of the 2020 election audit to President Fann.

We can report that there are problematic system-wide issues that relate to early ballot handling and verification. https://t.co/Pgogo9A7uO

Thank you AG Brnovich for staying committed to the election integrity issue.This is a great start and we look forward to future reports as your investigation continues. @FannKfann @GeneralBrnovich https://t.co/jhGYSv4vnG

Senate President Karen Fann called on AG Brnovich to open a criminal probe last fall over “several items in the reports that merit your attention of your office” regarding the Maricopa County Election Audit.

Related: Trump: ‘Now is Finally the Time for the Arizona Attorney General to Issue Warrants & Take his Investigation to the Next Level’

AZ Audit Contractor: “An Element of the Election System Was Actually Breached During the Course of the November 2020 Election”