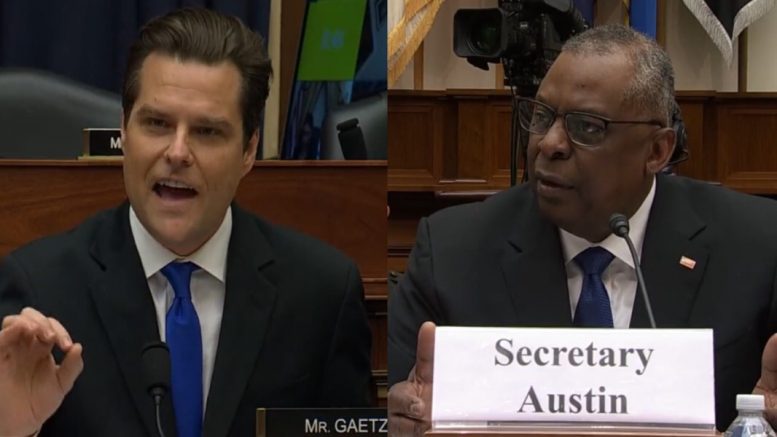 During a House Armed Services Committee hearing on Tuesday, Rep. Matt Gaetz (R-FL) accused Defense Secretary Lloyd Austin of having time to embrace “critical race theory at West Point, socialism at the Defense University, and mandatory pronoun training” instead of “developing capabilities and being more strategic” against potential conflicts with our enemies.

Gaetz also told Austin directly to his face that he is “embarrassed” by his “leadership”.

“This is the most capable, the most capable combat critical force in the world. It has been and it will be so going forward. The fact that you are embarrassed by your country…,” Secretary Austin said to Rep. Gaetz during the heated exchange.

The Florida congressman interjected, telling the secretary of defense, “No. I am embarrassed by your leadership!”

“I am not embarrassed for my country. .. You know, that is so disgraceful that you would sit here and conflate your failures with the failures of the uniformed service members. You guys said that Russia would overrun Ukraine in 36 days. You said that the Taliban would be kept at bay for months. You totally blew those calls,” Rep. Gatez told Sec. Austin.

Rep. Matt Gaetz: "No. I am embarrassed by your leadership!" pic.twitter.com/U3H1S99GTv