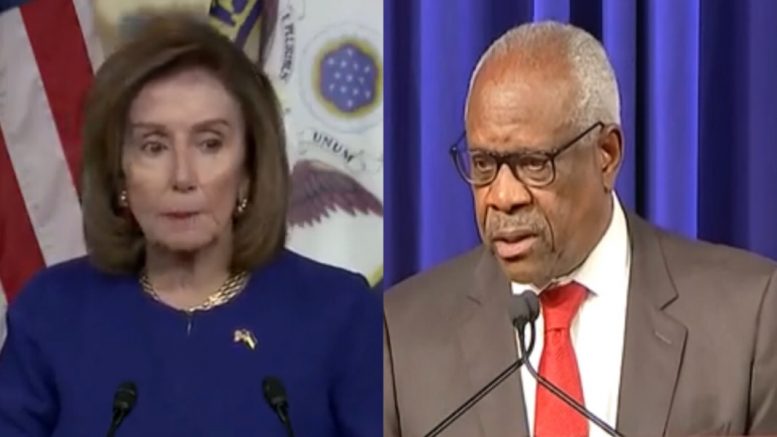 House Speaker Nancy Pelosi (D-CA) took a swipe at Supreme Court Justice Clarence Thomas during a press conference on Thursday when asked if he should step down from the high court, telling reporters, “I don’t think he should’ve ever been appointed.”

The California Democrat career politician declined to call for his resignation, but instead, advocated for the passage of the party’s For The People Act; H.R. 1, which she claimed would place stronger ethical standards on Supreme Court justices. She also accused Justice Thomas’ wife Ginni Thomas, of being a “proud member of a coup,” arguing that her communications with senior administration officials and conservative lawmakers over Joe Biden’s reported victory are worrisome.

Q: Do you agree with members of your caucus who are saying Clarence Thomas should resign?

Pelosi: "I don’t think he should’ve ever been appointed…if your wife is an admitted and proud contributor to a coup of our country, maybe you should weigh that in your ethical standards." pic.twitter.com/wQXGZ3GAtv

On November 10 after news organizations declared Biden the alleged winner, Ginni Thomas reportedly texted Meadows: “Help This Great President stand firm, Mark!!!…You are the leader, with him, who is standing for America’s constitutional governance at the precipice. The majority knows Biden and the Left is attempting the greatest Heist of our History.”

Justice Clarence Thomas, 73, is the longest-serving justice on the court. He was nominated by President George H.W. Bush in 1999 to succeed Thurgood Marshall, the nation’s first Black justice.

Meanwhile, some Republicans blasted Pelosi for saying that Justice Thomas never should have gotten the job. Continued Below

The Republican staff on the House Judiciary Committee tweeted, “Pelosi should have never been Speaker, and won’t be much longer. Stand with Justice Thomas!”

Pelosi should have never been Speaker, and won’t be much longer.

Pelosi & the Dems don't actually care if Americans are black, Hispanic, LGBTQ, transgender or female. They only care if they can weaponize their identities. Since Clarence Thomas doesn't serve their radical Marxist cause, they loathe him. It's that simple.https://t.co/3bzszKMHLm

She's a racist! @SpeakerPelosi on Justice Clarence Thomas: 'Never thought he should have been appointed' https://t.co/3oxjTEwYVR

This racist white woman is putting a strong Black man’s life at grave risk. (Am I doing this right?) https://t.co/YAjeW7B8GJ