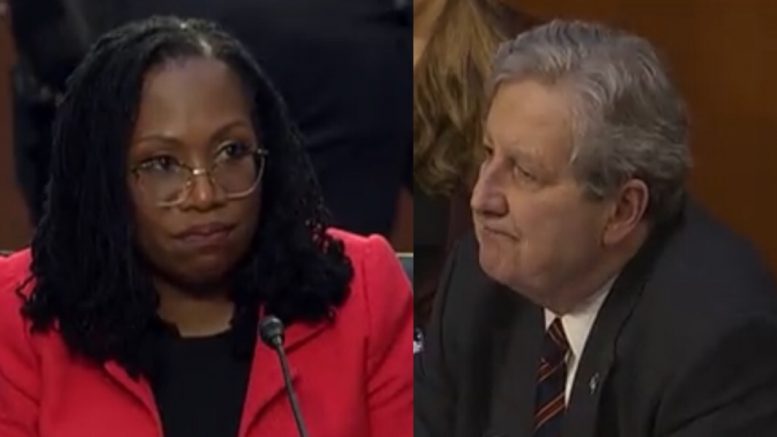 Joe Biden’s Supreme Court nominee Judge Ketanji Brown Jackson on Tuesday claimed that she did not know when life begins while being questioned by Senator John Kennedy (R-LA) during her confirmation hearing in the Senate Judiciary Committee.

“When does life begin, in your opinion?” the Louisiana Senator asked Judge Jackson.

“Senator, I don’t know. … I have personal, religious, otherwise beliefs that have nothing to do with the law, in terms of when life begins,” Jackson responded.

Asked does she have a personal belief about when life begins, Jackson said, “I have a religious view that I set aside when I am ruling on cases.”

“When does equal protection of the laws attach to a human being?” Senator Kennedy then inquired of Jackson.

“Well Senator, I believe that the Supreme Court … actually, I don’t know the answer to that question,” she said. Video Below

.@SenJohnKennedy: "When does life begin, in your opinion?"

Judge Ketanji Brown Jackson: "I don't know…I have a religious view that I set aside when I am ruling on cases." pic.twitter.com/Yt8CBJELZS

In another exchange on Tuesday between Senator Kennedy and Judge Jackson, the Louisiana Senator inquired over her opinion on court packing:

Judge Ketanji Brown Jackson: "I have an opinion about the effort. It's not an opinion that I think is appropriate for me to share. Therefore, I don't have anything further to add." pic.twitter.com/eJZwifmtyC