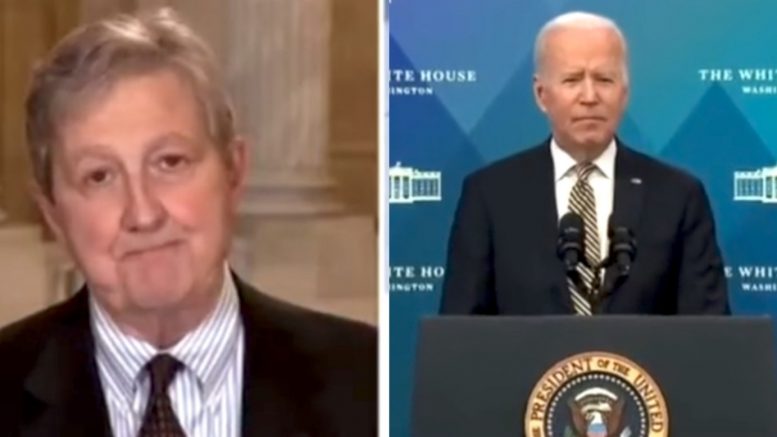 Sen. John Kennedy slammed Joe Biden’s economic and military response to Russia in wake of their invasion of Ukraine.

Appearing on Wednesday’s airing of Hannity, the senator from Louisiana gave credit to “the West’s sanctions” imposed on Russia’s central banks, as he feels it has hurt Vladimir Putin, but outside of that Kennedy feels the rest of the Biden Administration’s response has been a “wimp fest.”

Related Article: Judge Jeanine Levels Geraldo: ‘I Don’t Give a Damn what Putin Thinks’ – ‘He Was a Wuss when Trump Was President’

“The West’s sanctions on Russia’s central bank has hurt Putin and brought him to his knees, but it’s hurt him. So I suppose you could say that President Biden has gotten it right once in a row,” Kennedy said. “The rest of President Biden’s economic response to the invasion and military response to the invasion, in my judgement, has been a wimp fest.”

“Let’s take it first militarily. President Zelenskyy and the Ukrainian people are holding their own on the ground. They need air cover. Today, President Zelenskyy said, ‘Can you please help me get planes? Can you please help me get surface-to-air missiles? I’m not asking for American planes or pilots or troops, help me with your allies.’ President Biden’s response is the same as it always is. ‘I’ll get back to you in three to five business days.’ And he never gets back.” Video Below

.@SenJohnKennedy says sanctions from the west has hurt Putin but everything else Joe Biden has done has been a wimp feast. pic.twitter.com/247TIxl2FF