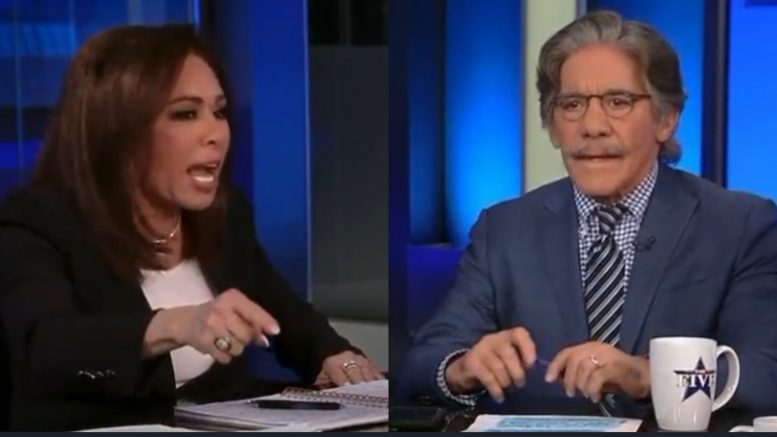 Judge Jeanine Pirro leveled her co-host Geraldo River with a reality check on Tuesday’s airing of The Five.

The pair were debating Russia’s decision to invade Ukraine under Joe Biden’s watch, and why Putin didn’t do it when Donald Trump was President.

Judge Jeanine: “I tell you right now that he didn’t do it (invade Ukraine) when Trump was President because he knew that Donald Trump would come in. If you touch one hair on one innocent civilian, he wouldn’t care — NATO or non-NATO. And don’t tell me Putin isn’t afraid of someone. Biden is responsible for the decline of the West. What we are seeing right now… is a wuss. We’ve got a bully in the yard, in the playground yard, in the school yard and everybody’s back at the fence… All [Biden] has to do is turn to America and let us be the strength. He is destroying the West!

Geraldo: “How do you know Putin wasn’t playing Trump?”

Judge Jeanine: “Oh, stop it! He wasn’t playing Trump! He didn’t invade when Trump was President!”

Geraldo: “I love Trump too!”

Judge Jeanine: “It’s not about loving Trump. It’s about the fact that Trump had everybody against the wall, and don’t think it was anything different!”

Geraldo: “How do you know that Putin didn’t think Trump would give him Ukraine anyway?”

Judge Jeanine: “I don’t give a damn what Putin thinks! I only care what Putin did, and he was a wuss when Trump was President. And that’s the end of it.” Video Below

“SHUT UP —I don’t give a damn!“ pic.twitter.com/xmnZUmFO7M

Michael Moore Sends A ‘Personal Appeal’ To The Ayatollah: “Let Me & Millions Of Americans Fix This Peacefully”