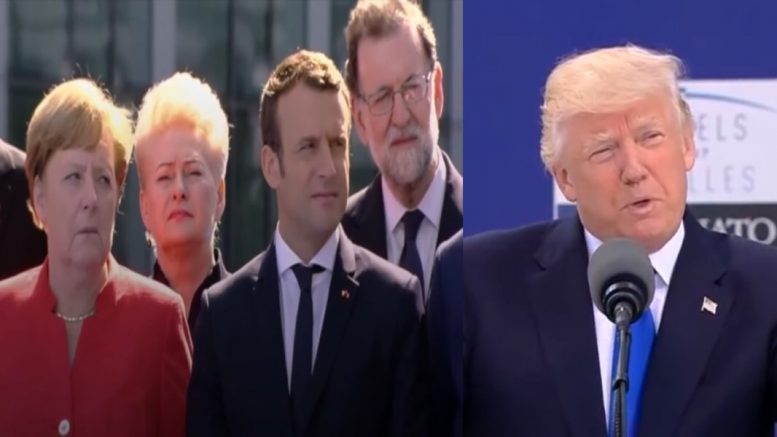 45th President Donald J. Trump issued an email statement on Wednesday reminding people that he was the one who “got the 20 out of 28 delinquent NATO countries to start paying the money that they owed in order to rebuild” the North Atlantic Treaty Organization (NATO).

Trump’s statement came on the heels of Ukrainian President Volodymyr Zelensky’s address to the United States Congress on Wednesday, pushing for a U.S. and NATO-enforced no-fly zone over Ukraine.

“People forget so quickly, with the help of the Fake News, that it was me that got the 20 out of 28 delinquent NATO countries to start paying the money that they owed in order to rebuild a floundering NATO,” 45th President Trump said from his “Save America” PAC.

“Nobody knew things would happen so rapidly, but NATO was poor and now it is rich, and all of the Fake News commentators that said Trump was tearing down NATO should be ashamed of themselves for telling lies,” he said.

The 45th President reiterated his past grievances that the United States’ European trading partners were taking “advantage” of it.

“Not only was the United States being taken advantage of by the EU on trade, but it was forced to pay the costs of the many delinquent NATO countries. Bush and Obama did nothing but make speeches and talk—I acted, and acted strongly,” he noted. Continued Below

“I said to them, ‘if you don’t pay up, no protection.’ They all paid up, and paid up quickly. It’s a story that’s never reported, but that’s only because we have a corrupt press in our Country!” Trump expressed.

In 2018, before a NATO summit in Brussels, Trump said it was “very inappropriate” that the United States was paying for European defense against Russia while Germany, the biggest European economy, was supporting gas deals with Moscow.

“On top of that, Germany is paying just over 1%, whereas the United States, in actual numbers, is paying 4.2% of a much larger GDP. So, I think that’s inappropriate also. You know, we’re protecting Germany, we’re protecting France, we’re protecting everybody and yet, we’re paying a lot of money to protect them. This has been going on for decades,” Trump had detailed. Continued Below

The 45th President ultimately got European countries starting to pay their fair share for NATO.

I know CNN & MSNBC never aired this, so I figured I would. Spot on, don't you think? pic.twitter.com/6V1vRKxP8p

“People forget so quickly, with the help of the Fake News, that it was me that got the 20 out of 28 delinquent NATO countries to start paying the money that they owed in order to rebuild a floundering NATO. Nobody knew things would happen so… pic.twitter.com/mnWPzTUovH

Joy Reid Says Trump’s ‘Hungry Constituency Were White’, Who Voted To Take ‘This Country Back From Brown People, The Immigrants’