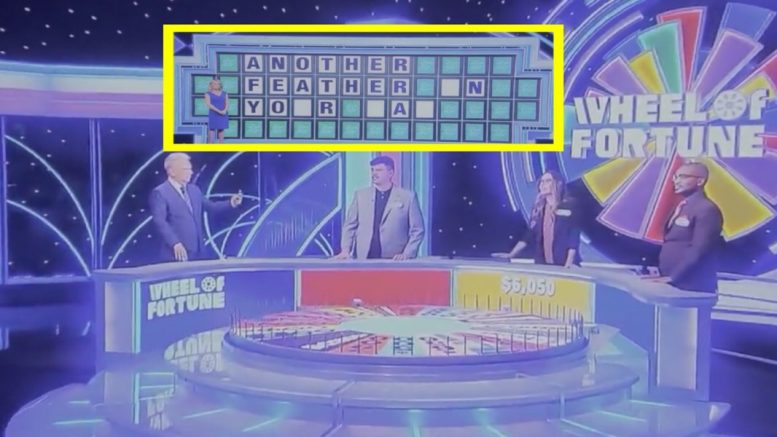 Pat Sajak, the host of “Wheel of Fortune”, defended one of his show’s contestants after three players were mocked online for several attempts at trying to solve a puzzle on Tuesday night’s game show.

Sajak took to Twitter on Wednesday, releasing a statement, in which he called on viewers to “have a little heart.”

The three competitors, Laura Machado, Christopher Coleman and Thomas Lipscomb, were all attempting to solve the puzzle, and the correct answer was “Another feather in your cap”.

So this just happened on Wheel of Fortune. pic.twitter.com/FgVunCEmDg

It always pains me when nice people come on our show to play a game and win some money and maybe fulfill a lifelong dream, and are then subject to online ridicule when they make a mistake or something goes awry.

Last night’s “Feather in your cap” puzzle was a case in point. Sitting at home, it seems incredible that they couldn’t solve it, but I knew in real time what was happening. Continued Below

The first attempted solve was “Feather in your hat” which, by the way, is how a lot of people say it. So all three players thought it was a good solve, and were stunned when I said it was wrong.

Now imagine you’re on national TV, and you’re suddenly thrown a curve and you begin getting worried about looking stupid, and if the feather isn’t in your hat, where the heck can it be? You start flailing away looking for alternatives rather than synonyms for “hat.”

And, of course, when it’s solved, you want to crawl in a hole. I’ve been praised online for “keeping it together” and not making fun of the players. Truth is, all I want to do is help to get them through it and convince them that those things happen even to very bright people.

But mocking them online and calling them names? These are good people in a bad situation under a kind of stress that you can’t begin to appreciate from the comfort of your couch. Good-natured laughter is one thing. Heck, they laughed at themselves. But, hey, cut them some slack. Unless you’re there, you have no idea how different it is in the studio.

I have fun with players and I tease them occasionally, but when things go wrong, I feel for them, and I try to salve the wounds on camera and off. So, yeah, it was an oddly entertaining puzzle and it’s okay to laugh at the situation. But have a little heart.

After all, you may be there one day. And no one wants to be trending on Twitter. Continued Below

We leave you with a few reactions from Twitterverse:

God help us all pic.twitter.com/rnQbkNvT7j

The dumbest two minutes in Wheel of Fortune history pic.twitter.com/8vlSIfHcWE

Blake Oestriecher, a contributor for Forbes Sports, wrote, “The woman on Wheel of Fortune got not one but TWO chances to solve this. First time, she said “…in your LAP.” Second time, she said ‘MAP.’ I am in utter disbelief. #WheelOfFortune”.

Warren Shaw, host of NBA Baseline, tweeted, “This might have been the worst two minute stretch in Wheel of Fortune history”.

This might have been the worst two minute stretch in Wheel of Fortune history 😂 pic.twitter.com/lz6HynkkF5

Another user on Twitter chimed in, saying, “A woman on Wheel of Fortune got this puzzle wrong three times. I’m yelling at the television like I’m watching a football game”.

A woman on Wheel of Fortune got this puzzle wrong three times. I’m yelling at the television like I’m watching a football game. pic.twitter.com/z97nubCC7G

Sen. Warren Demands Rich Pay ‘Fair Share’, James Woods Makes It Backfire: ‘Please Give Me Half Of Your Net Worth’