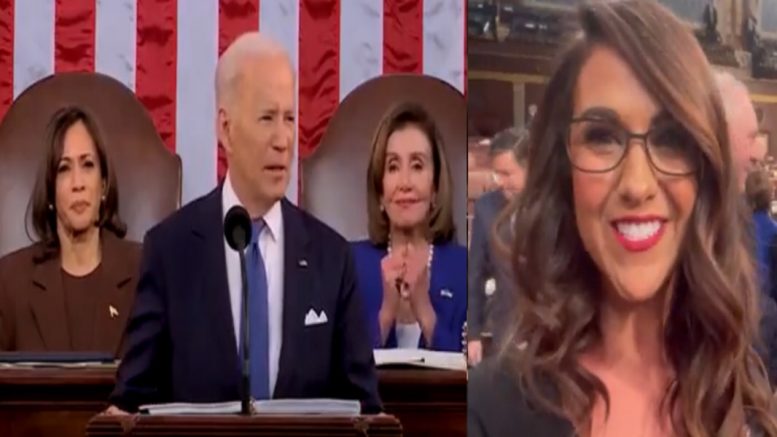 The Colorado congresswoman was referring to when Joe Biden, during his address, mentioned a flag draped coffin, prompting her to rip Biden’s Afghanistan exit by invoking the deaths of 13 US service members in an August bombing at Kabul’s airport.

As Joe Biden was speaking about veterans and making a very thinly veiled reference to his own late son Beau, the career politician said, “Our troops in Iraq and Afghanistan faced many dangers. One was stationed at bases and breathing in toxic smoke from ‘burn pits’ that incinerated wastes of war—medical and hazard material, jet fuel, and more.”

“When they came home, many of the world’s fittest and best trained warriors were never the same. Headaches. Numbness. Dizziness,” he said.

“A cancer that would put them in a flag draped coffin,” Biden said. “I know.”

“You put them in! 13 of them!” Rep. Boebert immediately shouted back to the 79-year-old Democrat, in reference to Biden’s disastrous pullout from Afghanistan that resulted in the deaths of the service members. Video Below

Woman in crowd calls out #Biden over the #13 soldiers who died when he botched the Afghanistan pull out. #SOTU #kabul #Afghanistan@JoeBiden
@PatriotPunkNetwork pic.twitter.com/2j8Zo3j4Ig

Rep. Boebert tweeted after the SOTU, “When Biden said flag draped coffins I couldn’t stay silent. I told him directly he did it. He put 13 in there. Our heroic servicemen and women deserve so much better”.

When Biden said flag draped coffins I couldn't stay silent. I told him directly he did it. He put 13 in there.

Our heroic servicemen and women deserve so much better.

“I just finished listening to a speech by Joe Biden, the weakest and worst president in American history, who has 13 Americans soldiers dead on his watch. America deserves a strong leader,” she expressed.

The #SOTU was light on solutions but heavy on spending.

We need to SOLVE the issues Americans care about, not spend our country into the ground. pic.twitter.com/ILM0mHKvgB

My friend ⁦@laurenboebert⁩ at #SOTU

She further released a video message from the chamber, showing politicians appearing to be done with COVID.

The #SOTU is over and so is social distancing.

The political science has been decided… pic.twitter.com/3SPcuOuFJh