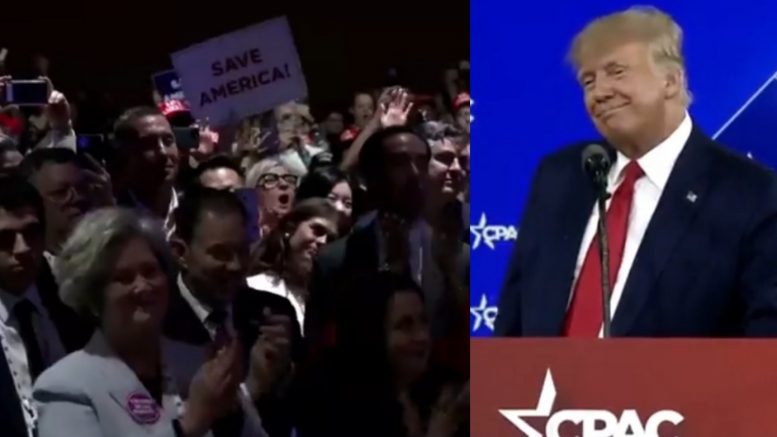 The crowd broke out in cheers on Saturday when Donald Trump said “in closing as your President.”

The 45th President appeared to be on the verge of touting one of several presidential successes while wrapping up his speech at CPAC.

Trump says "in closing as your president…" and the whole crowd started cheering. pic.twitter.com/9Dysb4LUja

In previous remarks during his speech at CPAC, Trump made it abundantly clear that he will be running for re-election in 2024, without formally announcing it yet.

“They’re going to find out the hard way starting on November 8, and then again, even more so on 2024, they will find out like never before,” he declared, before the audience roared with cheers and applause.

“We did it twice and we’ll do it again. We’re going to be doing it again, a third time,” the 45th President said, referring to reported election fraud that has since been uncovered after the 2020 election. “2022 will be the year that millions of everyday citizens stand up to the left wing fascists, and they’ll continue, and we will all continue together to make America great again.”

Trump: "They're going to find out the hard way starting on November 8, and then again even moreso on 2024, they will find out like never before." pic.twitter.com/GXW8C3jJbs

Graham Rips Members Of Congress Who Question If Soleimani Posed An ‘Imminent Threat’: “It’s Beyond Disgusting”

Sessions Tries Convincing Trump He Can Be ‘Trusted’, Trump Fires Back: “You Should Drop Out Of The Race”