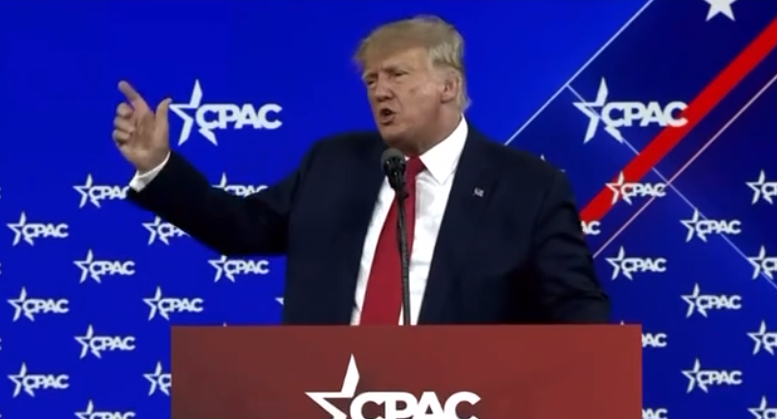 Speaking at CPAC on Saturday evening, 45th President Donald Trump pushed back at claims that the Democrats are the ones “defending democracy”, calling it “a lot of bulls**t”.

“When we win, we will defeat this corrupt political establishment, we will save our Republic and we will restore our Constitutional government of, by, and for the people,” the 45th President vowed. Continued Below

“The Washington swamp knows we are coming to break their grip on power forever. That is why they so desperate to stop us. They will go to any lengths, and that is why the corrupt Democrat prosecutors and unconstitutional un-select committee on January 6th,” he continued.

“Can you imagine a committee made of these thugs? They hate us all. … But they’re continuing their evil and persecution of me, my family, my staff, my supporters, and you,” the 45th President said.

Trump added, “It’s the same witch hunt that’s been going on since day one, since actually, the day I came down the escalator with our great future first lady.” Continued Below

“Where do you meet people like this? He actually made up a story about my phone call with the President of Ukraine,” he said of Schiff.

(Related: General Flynn: “The Deep State Buried Me, Wanted Me To Die…The American People Saved Me”)

AZ’s Ken Bennett: I’m Convinced ‘People Who Are Screaming’ About The Audit ‘Have Something To Hide’