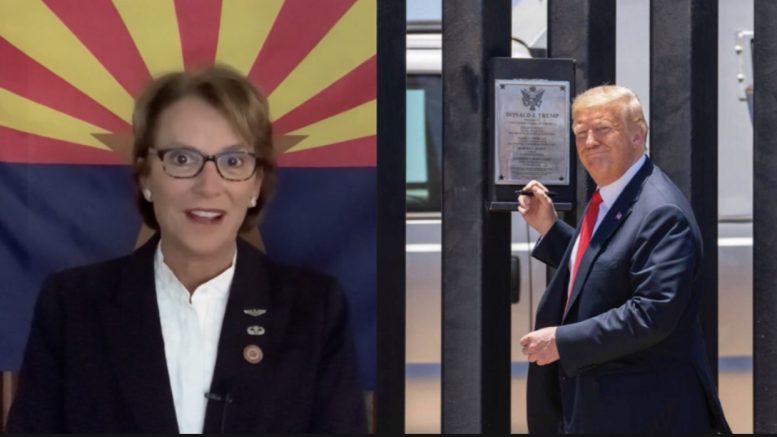 State Senator Wendy Rogers (R) announced on Wednesday that the Arizona state senate passed a bill to build a border wall on state lands in the Grand Canyon State.

Arizona Senate Bill SB1032, introduced by Rogers, passed 16-12, which will appropriate $700 million “from the state general fund in fiscal year 2022-2023 to the border security fund … to administer and manage the construction and maintenance of a physical border fence”, according to the bill.

“My bill to build the wall on state lands in Arizona passed the Arizona Senate. Amazing courage to all of the AYES. Thank you all. #BuildTheWall”, Senator Rogers tweeted.

My bill to build the wall on state lands in Arizona passed the Arizona Senate. Amazing courage to all of the AYES. Thank you all. #BuildTheWall pic.twitter.com/X1X2s6rEFz

The Fund consists of legislative appropriations, gifts, grants and other donations and is administered by the Arizona Department of Emergency and Military Affairs. Fund monies may be used on: 1) preventing human trafficking; 2) preventing entry into the United States of illegal aliens, terrorists, instruments of terrorism, contraband, narcotics and controlled substances; 3) planning, designing, constructing and maintaining transportation, technology and commercial vehicle inspection infrastructure near the international border;

SB 1032 will now go to the Arizona House for a vote, and if passed, then to Governor Doug Duecy’s desk.

When reached for comment by The Freedom Times regarding the Bill, a spokesperson for Governor Ducey’s office replied, “He doesn’t comment on pending legislation until passed” — [on his desk].

Yes! Great job @WendyRogersAZ @SonnyBorrelli @NancyBarto and the rest of you! The number one job of government is to keep the people safe. https://t.co/MzdR8SgkCu