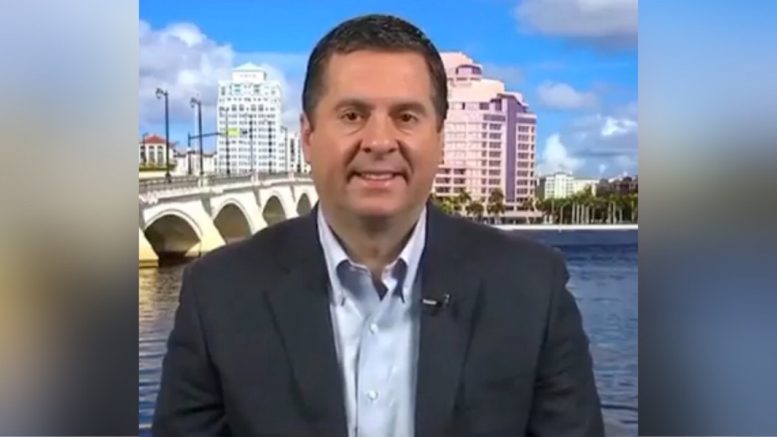 “If you look at our investigation that led to 14 criminal referrals that we’ve talked about numerous times … that House Republicans on the Intelligence Committee made to the Department of Justice — a lot of that had to do with circumstantial evidence, largely because we were misled or outright lied to by government officials,” Devin Nunes told Maria Bartiromo on Fox News’ “Sunday Morning Futures”.

In June of 2020, the former House Intelligence Committee ranking member disclosed to the public “around fourteen criminal referrals” related to their investigation into Russia probe origins, were sent to the DOJ, as reported by Swamp Drain.

“The documents that you then see that John Ratcliffe was able to get [declassified], you know, that is something more along the lines of direct evidence that we should’ve seen in Congress. … Now we’re starting to talk about direct evidence, and I think that’s the difference,” he said.

John Ratcliffe declassified two heavily redacted Russia-related documents in October 2020 when he was the former director of national intelligence, including handwritten notes from former CIA Director John Brennan, which revealed he briefed then-President Barack Hussein Obama in 2016 on an unverified Russian intelligence report. The report claimed former Secretary of State Hillary Clinton — planned in July 2016 — on tying then-candidate Donald Trump to Russia’s hack of the Democratic National Committee to distract from her improper use of a private email server.

“So we made our referrals largely based on circumstantial evidence, versus direct evidence and other types of evidence that John Durham is now getting to the bottom of,” Nunes explained. Continued Below

“You know, for example, missing phones that just suddenly reappeared a few weeks ago that obviously we would’ve wanted during our investigation, and Durham couldn’t even get to them, you know, for a year and a half,” the former California congressman said.

The Jan. 28 filing by Durham updated the court on precisely when Durham first learned of two cellphones that had been used by Baker while he was with the FBI. The existence of these phones was first mentioned in a Jan. 25 filing, in which Durham claimed that the Office of the Inspector General (OIG) had failed to disclose its possession of two FBI cellphones belonging to Baker, per The Epoch Times. Continued Below

“So what they’ve creatively done here … is they’ve set up legal avenues using lawyers to essentially launder all of this spying that was done and communicate to top DOJ and FBI officials. And Durham is starting to piece all of that together. Look, the hope would be here that he could bring some type of conspiracy charge because, God knows, there’s gotta be a dozen or more laws that have been broken here. And people need to pay a price for it,” Nunes said.

Asked how high up the chain he thinks it goes, Nunes replied, “We’ve always said it appears to us … all of the high level people within the Obama/Biden administration knew about this. Look at all the people now that were involved in perpetuating this hoax, the damage that it’s done to the American people, to our system of justice in this country, to our law enforcement.”

“A lot of these Obama/Biden people have now failed upward and they’re now in high-level positions in the new Biden administration. There’s a lot of people that need to pay a price here, and I’m glad Durham is not leaking, and hopefully he can bring more indictments,” he added. Continued Below