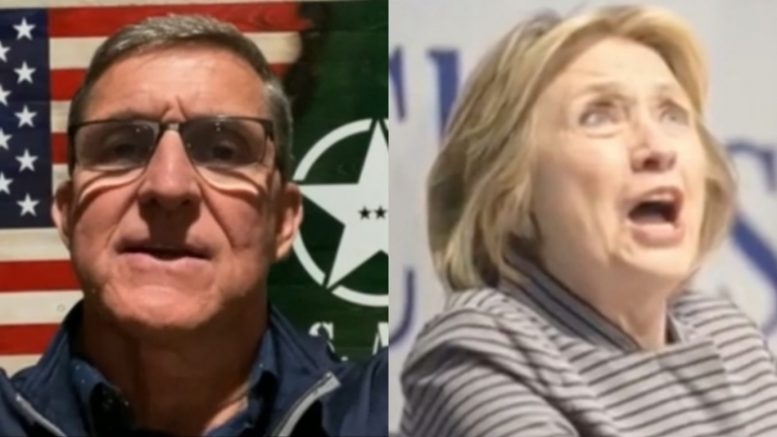 Retired Army Lt. General Michael Flynn explained that he suspects the Trump campaign was targeted in, what appears to be, an organized spying operation because the suspects involved “saw their power about to be taken from them”, and they were “scrambling to destroy Trump and anyone who got in their way.”

The former NSA director disclosed his thoughts in a statement released on Telegram after news broke that on February 11, 2022, Special Counsel John Durham filed the government’s motion to inquire into potential conflicts of interest in the Michael Sussmann case — alleging that lawyers from Hillary Clinton’s presidential campaign in 2016 had paid to “infiltrate” servers belonging to Trump Tower and later the White House, in order to establish an “inference” and “narrative” to bring to federal government agencies linking Donald Trump to Russia.

Below is Flynn’s full statement:

There was spying on the Trump campaign! It was illegal with no predicate all all…NONE!!!

The reason people within our own government spied on the Trump campaign, the transition after Trump won, and then while he was in the WH was because they saw their power about to be taken from them and all the likely suspects (now under investigation by Special Counsel John Durham) were scrambling to destroy Trump and anyone who got in their way…

I’ve known this for over five years. And now Americans all know the truth. This is also exculpatory evidence that was never provided in my case.

Through an illegal and unjustified investigation of my entire life, they never even found an unpaid parking ticket yet the DOJ, FBI, CIA, elements in DOD, and senior “leaders” in the WH then went on to threaten my entire family and attempted to destroy my life. Continued Below

Now you know why I refuse to quit despite even more attacks against me and my family. We’re facing pure evil, a takeover of our country and destruction of our democracy and the American way of life.

God is good and He will get us through this historic but challenging period, but only if we stand our ground. We must continue to use the citizen power we have remaining by virtue of our constitution given the time that we still have left here on earth.

Why I say Local Action can and will have a National Impact. Stand up, step up and speak up. No more excuses as to why you can’t get involved. God Bless America 🙏🏼🇺🇸  (See Below)

Related Article: Sen. Hawley: ‘The Clinton Campaign Was Really Just a Criminal Enterprise, Which Is What We’ve Known All Along’