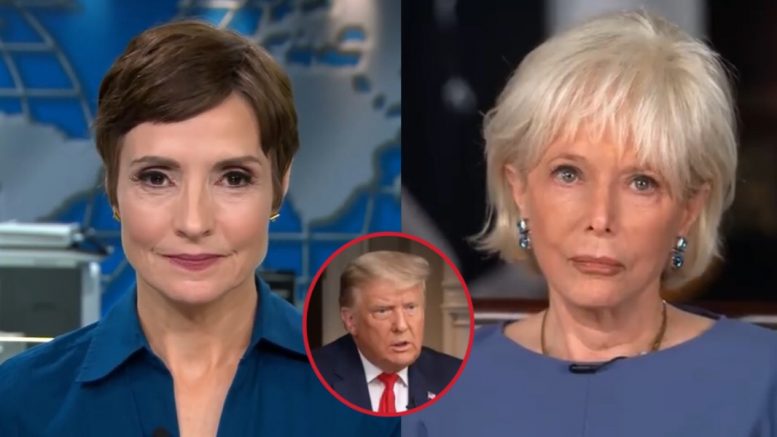 In late October of 2020 and before the Presidential Election, 45th President Donald Trump sat down with Leslie Stahl for an interview on CBS’s “60 Minutes”. Stahl dismissed claims that political operatives spied on Trump’s campaign, when he declared “the biggest scandal was when they spied on my campaign.”

“They spied on my campaign,” Trump said before Stahl told him, “There is no real evidence of that”.

“Of course there is, it’s all over the place,” Trump said as Stahl responded, “No.”

“Lesley, they spied on my campaign and they got caught,” Trump reiterated before Stahl interrupted again.

“Can I say something? You know, this is ’60 Minutes,’ and we can’t put on things we can’t verify,” Stahl claimed.

“You won’t put it on because it’s bad for Biden,” Trump shot back, which prompted Stahl to say, “We can’t put on things we can’t verify”. Video Below

At the time, Trump released his own footage of the interview amid concerns that CBS News’ “60 Minutes” wouldn’t air the president’s claim that he was spied on.

The 2020 interview has since resurfaced on social media after Special Counsel John Durham filed the government’s motion to inquire into potential conflicts of interest on February 11, 2022, in the Michael Sussmann case — alleging that lawyers from Hillary Clinton’s presidential campaign in 2016 had paid to “infiltrate” servers belonging to Trump Tower and later the White House, in order to establish an “inference” and “narrative” to bring to federal government agencies linking Donald Trump to Russia, as previously reported by The Freedom Times.

A major problem, however, with Stahl’s claim, in that CBS’s ’60 Minutes’ cannot “put on things we can’t verify”, does not pass muster and here’s why: Catherine Herridge and her highlighter.

Catherine Herridge is a CBS News senior investigative correspondent who began her role at CBS in November 2019 after leaving Fox News as Chief Intelligence correspondent. She has reported extensively over the developments surrounding reported government malfeasances on her Twitter account, and also previously on Fox News before joining CBS News. A simple search on her Twitter proves otherwise.

Before the Trump/Stahl interview aired, John Ratcliffe declassified two heavily redacted Russia-related documents in October 2020 when he was the former director of national intelligence, including handwritten notes from former CIA Director John Brennan, which revealed he briefed then-President Barack Hussein Obama in 2016 on an unverified Russian intelligence report. Continued Below

CBS News’ Herridge reported over the matter, weeks before the interview with Stahl and Trump.

to distract "the public from her use of a private email server." Comey testified under oath 9/30 to senate judiciary + told @LindseyGrahamSC the referral "didn't ring a bell" though FBI was knee deep investigating Russian election interference. @CBSNews https://t.co/xK9E7UbGQH

Herridge noted on Monday the information is “still relevant 16 months after first declassified by then DNI John Ratcliffe”.

Why is this important? Mr. Ratcliffe explained this week:

#Durham #DeclassifyEverything: Statement from @DNI_Ratcliffe “ODNI has now provided almost 1,000 pages of materials to he DOJ in response to Mr Durham’s document request” + “As the President has made clear, we must be appropriately transparent with the American people” @CBSNews pic.twitter.com/lfftp80q3g

She also reported on Durham’s latest filing on Sunday:

We leave you with much more of Herridge’s unbiased and relevant reporting:

#Durham NEW Indictment: Alleging “Igor Danchenko made false statements regarding sources of certain information he provided to a U.K. investigative firm (Steele dossier) that was then included in reports prepared by the investigative firm + subsequently passed (2016) to the FBI.” pic.twitter.com/PbZQPwpWLO

#Durham NEW: Indictment “..on Sept. 19, 2016, Sussman, a lawyer at a large international law firm, met with the FBI General Counsel at FBI HQ… Sussman had requested the meeting to provide the GC with certain data files + “white papers” that allegedly demonstrated a covert… pic.twitter.com/wrQ42tCOes

Herridge also pointed out that it “always pays to read the footnotes”.

(More from footnote 259) The Supervisory Intel Analyst told us that he factored the Alfa Bank/Trump server allegations into his assessment of Steele’s (dossier) reporting.” NOTE: always pays to read the footnotes

Our @CBSNews reporting from April 2020 https://t.co/P8sgyzTiny

was interviewed but "lacked candor" + the other declined to be questioned. #Durham

"….is authorized to investigate whether any federal official, employee, or any other person or entity violated the law in connection with the intelligence , + counter-intel, or law-enforcement activities directed at the 2016 presidential campaigns…” https://t.co/2mXlJyDfqu

intelligence product about Russian 2016 election interference. McCabe wrote, "We oppose CIA's current plan to include it (Steele dossier) as an appendix; there are a number of reasons why I feel strongly that it needs to appear in some fashion in the main body of the reporting."

was not a value judgement about the quality of the information. Instead it reflected the relatively uncorroborated + incomplete status of the FBI's assessment.” TIMING MATTERS: But two months earlier Comey signed off on using the dossier for @carterwpage FISA #doublestandard pic.twitter.com/CmA9scc700

#SpecialCounselDurham New POTUS MEMO authorizing use classified info in criminal Durham probe, “In addition, the AG is authorized to use classified information as he deems necessary in connection with his review, including in a GRAND JURY or other PROCEEDING”@CBSNews pic.twitter.com/t4TKh0Pyku

back? NEW INSIGHT ON STEELE: September 2016, 1 month before first FISA, “I would definitely say at a minimum Steele’s reports should be viewed as intended to INFLUENCE as well as INFORM” (BOLD my emphasis) REMEMBER: Source Sept 2016 Yahoo News article #CircularReporting

This denial not provided nor fact Page had supported CIA work. FBI lawyer pleaded guilty to altering CIA email in 2017 to falsely state Page was not a source to secure final FISA. Clinesmith sentencing Jan 2021 Texts via @ChuckGrassley + @SenRonJohnson https://t.co/EtRfe2r1Ih

NEW: Letter @tedcruz to AG Barr + Director Wray about former Director Comey + former Deputy McCabe’s testimony about their knowledge + approval of 2016 Clinton media leak, “One of them is lying under oath-a federal crime. 18 U.S.C 1621. The American people deserve to know who." pic.twitter.com/kIZvVJqY11

"Fusion GPS put pressure on Orbis (Steele firm) to talk to Mother Jones" + "With the breakdown that the (MJ) interview caused with FBI…that's when they decided to go the McCain/Kramer route" *ALSO SEE FBI Matrix receipt Fusion GPS/Glenn Simpson/Dossierhttps://t.co/u8JgYfpoYz

the overall material that fit with that call for information” @CBSNews https://t.co/u8JgYfpoYz

Trump campaign aide had NOT been a source for CIA, “defendant's offense was a very serious one with significant repercussions..public record also reflects political or personal bias may have motivated or contributed to his offense conduct" @ClareHymes22 https://t.co/vbnoWEESK9

government reiterates, however, the content of those exhibits was not altered in any way.” Records include CI chief Bill Priestap’s handwritten notes on Flynn interview, “What’s our goal? Truth/Admission or to get him to lie, so we can prosecute him or get him fired?” @CBSNews pic.twitter.com/63V2MHjpn4

interviews prepared by FBI in connection with the (Special Counsel)…the President's statements related to the authorization he had provided the AG to declassify documents as part of his ongoing review of intelligence activities relating to the 2016 President election..”@CBSNews

Trump Reacts As Facebook Loses Daily Users For First Time In Its History: “People Are Waiting For TRUTH”

Trump: “There’s A Reason That Joe Biden Can’t Walk Into A Sports Stadium Anywhere In America Without Being Loudly Mocked & Ridiculed”