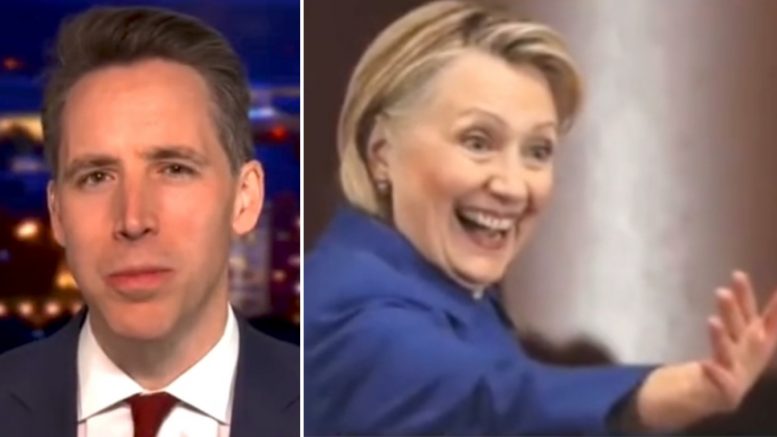 The senator from Missouri made the comparison while responding to earlier remarks made by Clinton, who appeared to call special counsel John Durham’s latest bombshell filing a “fake scandal.”

In a twitter post on Wednesday, Hillary claimed, “Trump & Fox are desperately spinning up a fake scandal to distract from his real ones. So it’s a day that ends in Y.”

“The more his misdeeds are exposed, the more they lie,” she alleged, attaching an article from Vanity Fair to her post, urging followers to read the left-wing publication’s spin over the matter.

Trump & Fox are desperately spinning up a fake scandal to distract from his real ones. So it's a day that ends in Y.

The more his misdeeds are exposed, the more they lie.

For those interested in reality, here's a good debunking of their latest nonsense.https://t.co/iYY8Uxuogx

It’s clear now there was collusion afterall in the 2016 campaign, and the collusion was between Hillary Clinton and some tech executives who did, in fact, spy on Donald Trump, who did access his email servers… and worse than that… who went on, according to special counsel, went on to try to infiltrate — that is spy on — the Executive Office of the President of the United States.

This is some crazy, crazy stuff that Hillary has been involved in, and now it turns out the Clinton campaign was really just a criminal enterprise, which is what we’ve known all along. Somebody should go to jail for this, and I hope the special counsel is pretty soon going to be talking to Hillary Clinton.

.@HawleyMO tells @JesseBWatters it turns out the Clinton campaign was just a criminal enterprise in which we knew all along. pic.twitter.com/vQHFsM0qnw

.@HawleyMO tells @JesseBWatters he’s found the good use of the January 6 committee. If they want to look in to presidential election interference they should start in 2016. pic.twitter.com/JxBoadBHA4