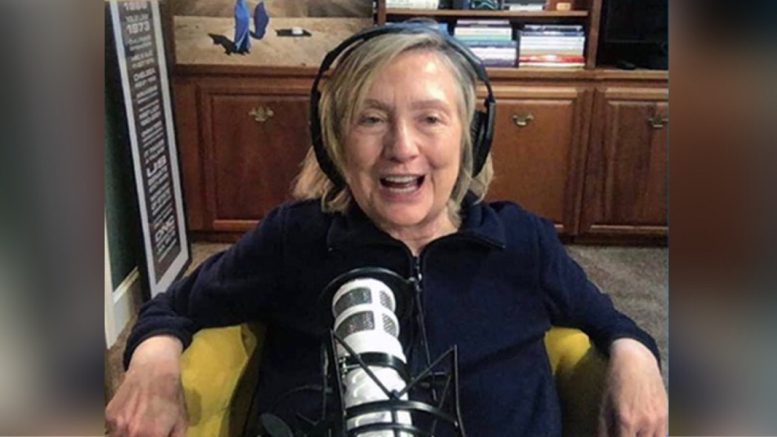 In a twitter post on Wednesday, Hillary Clinton claimed, “Trump & Fox are desperately spinning up a fake scandal to distract from his real ones. So it’s a day that ends in Y.”

“The more his misdeeds are exposed, the more they lie,” she alleged, attaching an article from Vanity Fair to her post, urging followers to read the left-wing publication’s spin over the matter.

Trump & Fox are desperately spinning up a fake scandal to distract from his real ones. So it's a day that ends in Y.

The more his misdeeds are exposed, the more they lie.

For those interested in reality, here's a good debunking of their latest nonsense.https://t.co/iYY8Uxuogx

On Tuesday, Clinton was spotted arriving at her daughter’s New York City apartment and was grilled by a Daily Mail reporter over Special Counsel John Durham’s latest filings.

She was seen wearing a blue coat, black pants, and an oversized black mask on her face, but refused to to answer questions over allegations related to the Durham investigation.

“Hillary, Laura Collins, Daily Mail. Did you pay to spy on the Trump campaign? When are you going to comment on the spying allegations, Hillary? Did you pay to have them spied on?”, the Daily Mail chief investigative reporter asked the former secretary of state.

45th President Donald Trump issued a series of statements over Durham’s latest court filing and said over the weekend the development vindicates his longtime claims that the Democrats and corporate news outlets unfairly and falsely linked his campaign to Russia.

“It shows how totally corrupt and shameless the media is,” Trump said. “Can you imagine if the roles were reversed and the Republicans, in particular President Donald Trump, got caught illegally spying into the Office of the President?”

“All hell would break loose and the electric chair would immediately come out of retirement,” he suggested. “The good news is, everybody is talking about not only this atrocity against our Nation, but that the press refuses to even mention the major crime that took place.” Continued Below

According to the declassified notes, Brennan and the U.S. intelligence community knew months prior to the 2016 election that the collusion smear was the result of a campaign operation hatched by the campaign of Democratic presidential candidate Hillary Clinton, as reported by The Federalist.

(Related: Nunes On Spy-Gate: ‘When They Didn’t Find Anything, They Made It Up & They Framed A Sitting President Of The United States’)