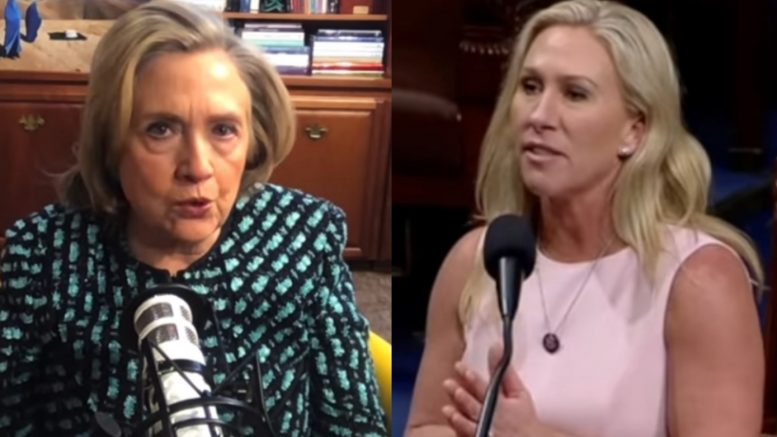 Rep. Marjorie Taylor Greene weighed in after a February 11 filing from Special Counsel John Durham claims that lawyers for the Clinton campaign paid a technology company to “infiltrate” servers belonging to Trump Tower, and later the White House, in order to establish an “inference” and “narrative” to bring to government agencies linking Donald Trump to Russia.

“Many people should be in jail for paying for and actively purposely spying on candidate and then President Trump,” Rep. Greene said in a statement posted to Twitter. “But they aren’t and does anyone ever believe they will be?” “None of these people ever go to jail and everyone is fed up with it.”

The National Security State is emboldened and completely out of control.

Are they spying on him now?

And it’s all about politics.

You know who does go to jail?

If average Americans commit a crime, they go up jail.

If they refuse to wear a paper mask to a school board meeting, parents are arrested & hauled off in cuffs.

But illegally spy on Pres Trump?

Those people are running the country.

Now while Hillary Clinton, her attorneys, and everyone they hired and actively were involved in Russiagate are walking around free and now many of them are currently involved in Witch Hunt 2.0, again innocent President Trump & Republicans are being wrongly framed and pursued.

Russiagate is treason in the highest form.

Not holding these people accountable for their crimes is treason on behalf of our justice system.

Refusing to prosecute these high crimes makes them all a part of the big Russian con and ongoing coup.

This can not be allowed.

Special Counsel John Durham filed the government’s motion to inquire into potential conflicts of interest in the Michael Sussmann case. Sussmann was charged with giving false statements to then-FBI General Counsel James Baker regarding the interests he was representing in pushing to the FBI the Alfa Bank/Trump Organization hoax, as reported by Swamp Drain.

Techno Fog reported: Joffe and his associates manipulated this information to further a conspiracy theory that Trump and those in Trump’s orbit were continuing their secret backchannels with the Russians. This was repackaged with the Alfa Bank hoax and given to Sussmann, who then laundered it to the CIA on February 9, 2017. Sussmann alleged to the CIA that the data showed “that Trump and/or his associates were using supposedly rare, Russian-made wireless phones in the vicinity of the White House and other locations.” Durham “identified no support for these allegations”. Continued Below

Read the 13 page filing: GOVERNMENT’S MOTION TO INQUIRE INTO POTENTIAL CONFLICTS OF INTEREST.

“I think it’s the political crime of the century, and they’ve been caught, let’s see what happens to them all.”

During a ’60 Minutes’ interview in Oct. 2020, Trump reiterated that his campaign was spied on, but  Lesley Stahl was not having it.

(Related: ‘Indisputable Evidence’: Trump Declares After Durham Reveals DNC Allies ‘Exploited’ DNS Traffic to Gather Intel on the ‘Executive Office of the President of the U.S.’ )