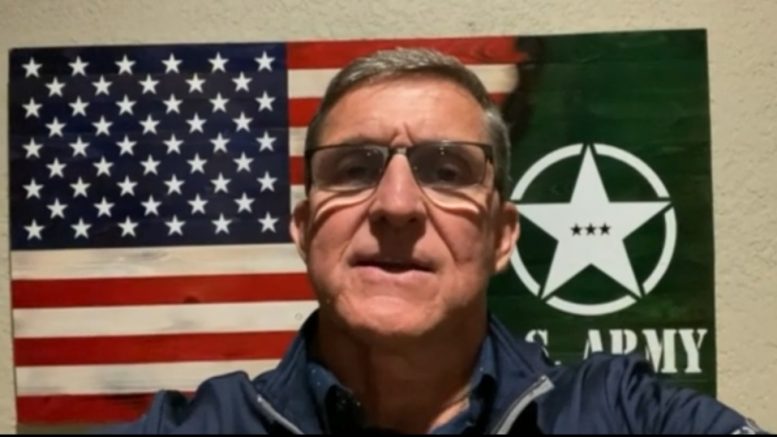 Retired Army Lt. General Michael Flynn lashed out at his haters and expressed words of encouragement for all Americans in a statement released on Telegram following explosive data that was presented at a hearing held by Wisconsin’s Assembly Committee on Campaigns and Elections alleging “fake voters” cast ballots in Wisconsin’s 2020 election.

Peter Bernegger, who resides in New London, “was invited to speak to the Assembly Committee on Campaigns and Elections by state Rep. Janel Brandtjen, R-Menomonee Falls, the panel’s chair. Brandtjen said Bernegger had acquired material she hadn’t seen elsewhere,” WPR reports. “During his presentation Wednesday, Bernegger displayed a series of slides and spreadsheets, sometimes highlighting specific voters whom he said had moved. Many, he alleged, were ‘illegally registered.’”

45th President Donald Trump’s personal spokesperson, Liz Harrington, posted a series of clips showing Bernegger presenting his work to the committee, which can all be seen by CLICKING HERE.

As part of his statement regarding the hearing, Flynn posted key takeaways from part of Bernegger’s presentation, as follows:

* “We’ve found tens of thousands of these.”

Flynn then included the following response to the findings:

These are the issues… we must be dealing with and NOT the nonsense from some pretenders who throw accusations and insults and frankly, DO NOTHING whatsoever to move the needle further along. All who throw those insults at me and others, you can shove it. My cause is the American cause. Yes, we must fight election fraud at every step and continue to show the American people that if you take your freedoms for granted and you blindly go into the voting booth without paying attention to the election process, we have results such as this past NOV 2020 presidential election. We know (and they know) massive election fraud occurred. Yes we have to fix it and absolutely people must be held accountable all the way up to the highest levels of our government. But we must continue to engage in the civic citizens process that our republic is designed around and that is our constitution.

This is why I am adamant about LOCAL ACTION = NATIONAL IMPACT!!!

Get involved in your communities like never before. Let’s ensure we continue to fix our (We The People’s) election system. We MUST! But simultaneously, we MUST get ready for the next election, especially the upcoming primaries. Do not wait for the general election. This year’s primaries should result in the highest voter turnout in our nation’s history (and choose wisely)…Seek those candidates that are “America First” candidates who will bring fresh ideas to the local, state and federal levels of government.

Time to stand up, step up and speak up! And it’s high time for those who offer nothing but whining and complaining to shut up.

I know where I stand and it is and has always been for this difficult but beautiful experiment in democracy called a constitutional republic. I know what service means and I’ve experienced sacrifice that no American citizen should ever have to experience. In fact, there are far too many sacrifices throughout our history to give up now.

Thanks for those who support these ideas and to those who don’t, you can go to hell…