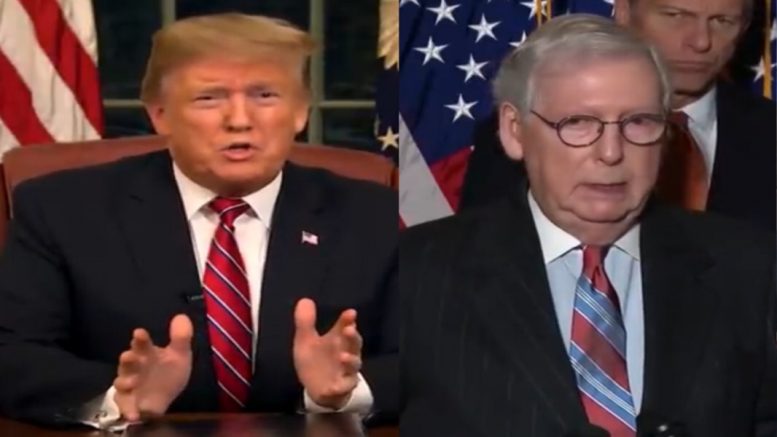 45th President Donald J. Trump issued a statement via email from his “Save America” PAC, weighing in a second time on Wednesday evening over remarks made by Senate Majority Leader Mitch McConnell (R-KY) who had criticized the Republican National Committee’s (RNC) censure of Reps. Liz Cheney (R-WY) and Adam Kinzinger (R-IL) and its characterization of the January 6, 2021, Capitol protest as “legitimate political discourse.”

Trump’s latest statement came a day after McConnell pushed back against the RNC’s censure of Cheney and Kinzinger for their roles on the select committee, saying in part, “We saw it happen. It was a violent insurrection for the purpose of trying to prevent the peaceful transfer of power after a legitimately certified election, from one administration to the next. That’s what it was.”

“For the Old Crow Mitch McConnell to say that the RNC should not censure walking Democrat sound bites, Liz Cheney and Cryin’ Adam Kinzinger, is so against what Republicans are about,” Trump said.

“It’s not as bad as the two-month extension he gave the Democrats when they were ready to fold, but the censure of Cheney and Kinzinger is a good and very appropriate thing to do as it pertains to our great Republican Party!” he noted. Continued Below

The 45th President was referring to when McConnell offered Democrats a two-month reprieve on the debt ceiling last year in October.

McConnell, in a statement, had said Republicans would help Democrats expedite the process known as reconciliation to address the debt limit, adding, Republicans would let Democrats pass an emergency debt limit extension at a fixed dollar amount, which would cover current spending levels into December.

In statement via email on October 6, Trump said, “Looks like Mitch McConnell is folding to the Democrats, again. He’s got all of the cards with the debt ceiling, it’s time to play the hand. Don’t let them destroy our Country!”

Reps. Liz Cheney and Adam Kinzinger both sit on the Democrat-led January 6 committee that is allegedly probing the events that unfolded at the Capitol.

In another email statement on Wednesday, Trump shared an article from Pew Research Center written by Bradley Jones, titled: Fewer Americans now say Trump bears a lot of responsibility for the Jan. 6 riot.

“Very much appreciated—but there would have been no January 6 had Nancy Pelosi, as strongly recommended by me, sent in Soldiers or the National Guard days before the event took place. She is in charge of Capitol Security—not the President. The Unselect Committee would have been able to work on another Hoax, Scam, or Witch Hunt had Nancy done her job. The Capitol would have been secure!” the 45th President insisted. Continued Below

Democrats when they were ready to fold, but the censure of Cheney and Kinzinger is a good and very appropriate thing to do as it pertains to our great Republican Party!"

nothing to stop the lawless Biden Administration, the invasion of our Borders, rising Inflation, Unconstitutional mandates, the persecution of political opponents, fact finding on the incompentent Afghanistan withdrawal, the giving away our energy independence, etc., which is all

If Mitch would have fought for the election, like the Democrats would have if in the same position, we would not be discussing any of the above today, and our Country would be STRONG and PROUD instead of weak and embarrassed."

before the event took place. She is in charge of Capitol Security—not the President. The Unselect Committee would have been able to work on another Hoax, Scam, or Witch Hunt had Nancy done her job. The Capitol would have been secure!"https://t.co/Uuv8c95z9H

Trump Announces He ‘Will Deliver Remarks At A Major Rally In Cullman, Alabama, On August 21’