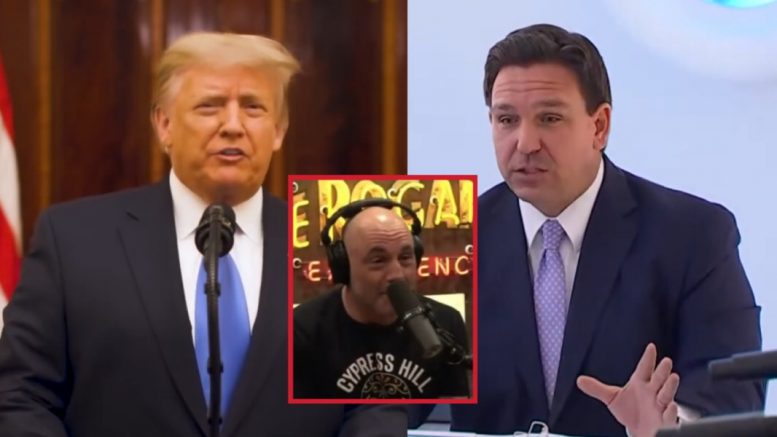 On Monday, 45th President Donald Trump issued an email statement on Monday urging Joe Rogan not to apologize to “the fake news and Radical Left maniacs and lunatics” for statements he had made in the past amid his ongoing Spotify podcast controversy.

Rogan, the podcast superstar, — host of “The Joe Rogan Experience” — issued an apology on Saturday for his past use of the N-word after a video of him using the racial slur repeatedly on his show went viral. He said past episodes of his podcast contained things “that I wish I hadn’t said, or had said differently.”

“There’s nothing I can do to take that back. I wish I could. Obviously, that’s not possible,” Rogan said in a video on his Instagram. “I certainly wasn’t trying to be racist, and I certainly would never want to offend someone for entertainment with something as stupid as racism.”

Trump, in a statement on Monday, said, “Joe Rogan is an interesting and popular guy, but he’s got to stop apologizing to the Fake News and Radical Left maniacs and lunatics. How many ways can you say you’re sorry?”

“Joe, just go about what you do so well and don’t let them make you look weak and frightened. That’s not you and it never will be!” the 45th President advised.

Rogan also apologized earlier this month — and pledged more balance — after a string of artists, starting with Neil Young and Joni Mitchell, quit Spotify and accused him of spreading COVID-19 misinformation on his wildly popular podcast, New York Post reported. Continued Below

“If I pissed you off, I’m sorry,” Rogan said at the time. “I’m not trying to promote misinformation. I’m not trying to be controversial … I’ve never tried to do anything with this podcast other than just talk to people and have interesting conversations.”

Likewise, Florida Governor Ron DeSantis (R), in an interview with Fox News on Monday, expressed a similar sentiment as Trump, suggesting that mainstream media outlets and the left “fear the fact that he can reach so many people, and so, they’re out to destroy him.”

“No, he shouldn’t have apologized. I mean, you see what happens? The mob will come after people, and they’re targeting Rogan because he’s threatening to upset the apple cart on some of the things that they’re holding dear. And with COVID, he’s just bringing opposing views. He’s letting people decide. They say he’s against [the COVID vaccine]. I do not listen to his show, but then I read he specifically advocated for people with co-morbidities and elderly to get vaccinated,” Governor DeSantis said. Continued Below

“I think a lot of the legacy outlets and I think the left fear the fact that he can reach so many people, and so they’re out to destroy him. But what I would say is don’t give an inch. Do not apologize. Do not kow to the mob. Stand up and tell them to pound sand; if you do that, there’s really nothing that they’re able to do to you. The only way they have power is if you let them get your goat,” DeSantis added.

make you look weak and frightened. That's not you and it never will be!"

Meanwhile, Rumble is offering Joe Rogan a $100 million deal to join the Canada-based video platform in an attempt to woo the popular podcast host away from Spotify.

“We stand with you, your guests and your legion of fans in desire for real conversation. So we’d like to offer you 100 million reasons to make the world a better place,” Rumble CEO Chris Pavlovski wrote in a note shared on Twitter. “How about you bring all your shows, both old and new, with no censorship, for 100 million bucks over four years? This is our chance to save the world. And yes, this is totally legit.”

Hey @joerogan, we are ready to fight alongside you. See the note from our CEO @chrispavlovski… pic.twitter.com/G7ahfNNjtP

Spotify CEO Daniel Ek apologized to his staff in a memo on Sunday and noted that the company and Rogan’s team had agreed to remove a select number of episodes from the platform. While Ek strongly condemned Rogan’s previous use of “racially insensitive language”, he added that he did not believe in “silencing” Rogan.

“We should have clear lines around content and take action when they are crossed, but canceling voices is a slippery slope,” he said. “Looking at the issue more broadly, it’s critical thinking and open debate that powers real and necessary progress.”

Ek added that Spotify would invest $100 million in licensing, development and marketing of music and audio content from “historically marginalized groups.”