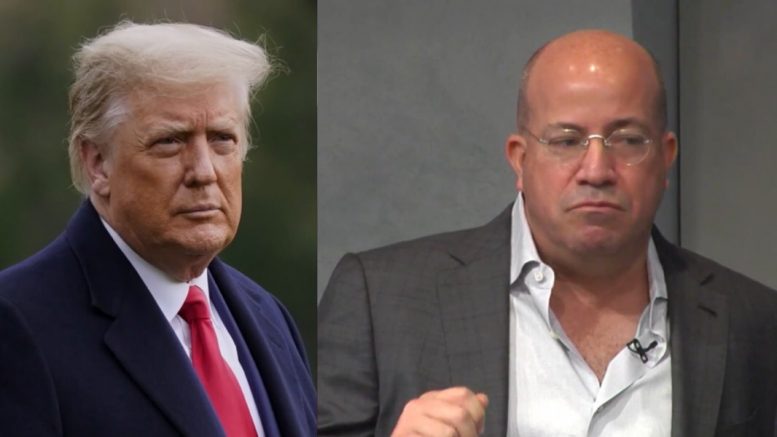 Zucker issued a memo to CNN staff on Wednesday, announcing his immediate departure and said he’s resigning for not disclosing a consensual relationship with a colleague, as previously reported by The Freedom Times.

In a memo to colleagues, Jeff Zucker said his relationship with CNN’s Executive Vice President and Chief Marketing Officer Allison Gollust came up during a probe into Chris Cuomo. Zucker has helmed the cable network for nine years.

“The stench of Jeff Zucker is finally leaving CNN. The air over there, the Radical Left will be happy to hear, is being made more ‘environmentally friendly.’ The carbon footprint is looking better,” Trump said in a statement from his “Save America” PAC.

“But the stench remains, and also at low-rated MSDNC, where weak leaders like Brian Roberts, of ‘Concast,’ who are under the thumb of the Left, don’t allow the truth to be told,” the 45th President said.

“Stockholders should not treat these companies well. We need a free and open press in our Country, and we need it now!” he urged. Continued Below

However, at Comcast’s annual shareholder meeting last June, CEO Brian Roberts claimed that the company’s corporate management team does not supervise the company’s news outlets, according to the National Center for Public Policy Research, which participated in the meeting.

“I have always honored the pledge that we made when we bought NBC Universal, and our agreement with the FCC, that we would not interfere in the news operations,” Roberts said in response to a question from Free Enterprise Project Deputy Director Scott Shepard.

Trump on Thursday, in a different statement, suspected Zucker actually resigned from CNN not because of his romantic relationship with a colleague, but “because of the horrible ratings down [by] 90%”. Continued Below

“Jeff Zucker is not out at CNN for ‘concealing a relationship’ as the Fake New York Times writes on its front page headline. Zucker is happy and proud (and lucky!) that he can have a relationship. He is out because of horrible ratings down 90%, an all-time low!” the 45th President opined.

Jeff Zucker wrote in a memo to CNN staff on Wednesday: “As part of the investigation into Chris Cuomo’s tenure at CNN, I was asked about a consensual relationship with my closest colleague, someone I have worked with for more than 20 years. I acknowledged the relationship evolved in recent years. I was required to disclose it when it began but I didn’t. I was wrong. As a result, I am resigning today.”

“I came to CNN on January 28, 2013. Together, we had nine great years. I certainly wish my tenure here had ended differently. But it was an amazing run. And I loved every minute,” Zucker said. “I am grateful to the thousands of incredibly talented CNN and Turner Sports employees who helped make this such a joy for me, and such a success for all of us. I wish each of you nothing but the best in the years ahead.” Continued Below

MSDNC, where weak leaders like Brian Roberts, of “Concast,” who are under the thumb of the Left, don’t allow the truth to be told. Stockholders should not treat these companies well. We need a free and open press in our Country, and we need it now!”

of horrible ratings down 90%, an all-time low!”

Reporter Asks: ‘You’re Not Encouraging Americans To Inject Disinfectant?’, Trump Reacts: “No, Of Course, Not. …It Was Said Sarcastically”

Herschel Walker’s Son Goes Off On The BLM Movement: “Black Lives Matter Should Be About All Black Lives!”