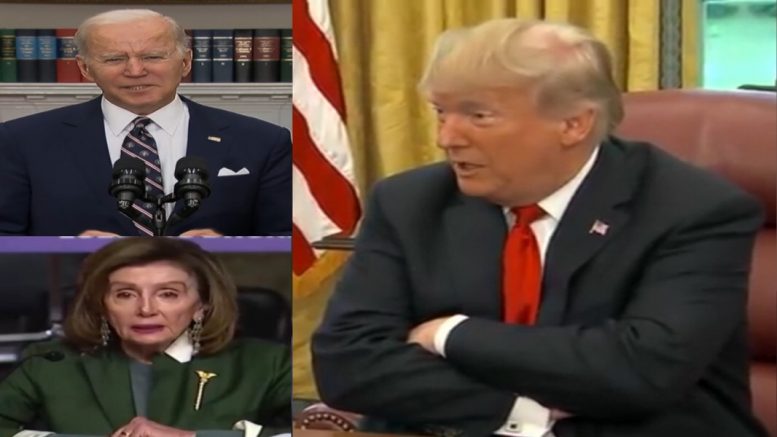 45th President Donald J. Trump issued an email statement on Friday from his “Save America” PAC suggesting the January 6 Committee is “corrupt” and “nothing but a cover up” for House Speaker Nancy Pelosi (D-CA), who Trump said on Thursday — she did not “properly secur[e] the Capitol with Soldiers or the National Guard” ahead of him delivering a speech to thousands of his supporters, gathered at the Ellipse in Washington, D.C.

Trump also suspected the Committee carries on to distract from “Biden’s failed Administration”.

“If Nancy Pelosi does her job on security, there is no ‘January 6.’ So the corrupt Unselect Committee should stop its work immediately! The Committee is nothing but a cover up for Pelosi’s failure to act and Biden’s failed Administration,” the 45th President said in his statement.

Trump was asked by Sean Hannity on Fox News last month if he authorized the request for 20,000 troops in the lead-up to the protests. “One hundred percent, and attested to by many people. And they turned it down. Nancy Pelosi turned it down, and she is in charge of the Capitol,” he said. “They run the Capitol, the security of the Capitol. If you had 10,000 or 20,000 or even 5,000 soldiers wrapped around the Capitol, you would have had no January 6 as we know it”.

“The more time the Fake News Media spends talking about this, the less time they have to talk about Inflation, the horrendously implemented Afghanistan withdrawal, rising gas prices, loss of energy independence, Woke military leaders, etc,” the 45th President continued, in his Friday statement.

“That’s what the Radical Left Dems want!” he added. Continued Below

Congress, via the police department, is arguing that the videos and emails being sought are not matters of public record and that there is no public interest in their release. Furthermore, the body is claiming that sovereign immunity prevents citizens from suing for their release, Just The News reported. Continued Below

The more time the Fake News Media spends talking about this, the less time they have to talk about Inflation, the horrendously implemented Afghanistan withdrawal, rising gas prices, loss of energy independence, Woke military leaders, etc. That’s what the Radical Left Dems want!”

(Related: Trump: ‘Why Is Crazy Nancy Pelosi & Her Files, Which Reportedly Have Been Largely Destroyed & Deleted, Not Under Investigation?’)