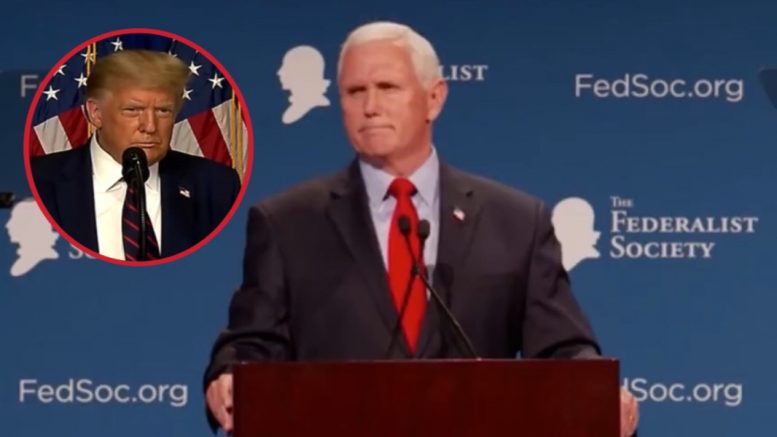 While delivering a speech in Florida Friday, former Vice President Mike Pence claimed that he did not have the ability to use his power to contest the 2020 presidential election.

His remarks come after, Trump, the 45th President, issued a statement last weekend, in response to efforts by a bipartisan group of Democrats and “RINO Republicans”, according to Trump, who are trying to pass legislation that would clarify the Vice President’s role when it comes to certifying the results of a Presidential Election.

Responding to Trump’s remarks, Mike Pence said in his speech to the Federalist Society on Friday, “Under Article II Section One, elections are conducted at the state level, not by Congress” and that “the only role of Congress with respect to the electoral college is to open and count votes submitted and certified by the states. No more, no less”. Continued Below

“Under the Constitution, I had no right to choose the outcome of our election. And Kamala Harris will have no right to overturn the election when we beat them in 2024,” he added. Video Below

I’m watching Mike Pence throwing President Trump under the bus. I don’t like it. Mr. Pence you will not be president Trump‘s running mate in 2024.

Attention Republicans: if you’re not loyal to President Trump just leave the party!